Nick Jonas On Welcoming Daughter Malti Marie: It's Been A Magical Season In Our Life
Advertisement 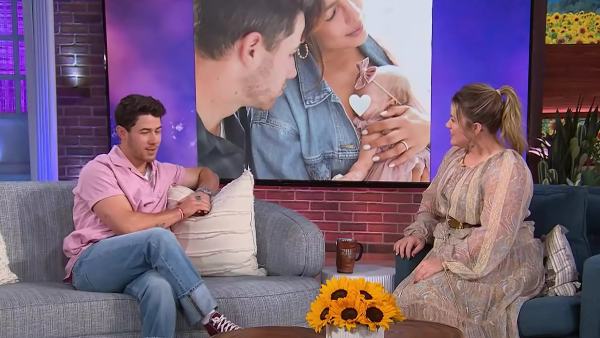 Priyanka Chopra and Nick Jonas welcomed their baby girl, Malti Marie Chopra Jonas earlier this year via surrogacy. The couple shared the news on their social media accounts, and now, the singer has opened up about the same during his appearance on The Kelly Clarkson Show.

Nick and Priyanka who have been quite protective of their baby girl’s privacy, rarely speak about their daughter during public appearances. However, Nick did talk about becoming a father and his parenting journey with Priyanka. Calling Malti their blessing, Nick told Kelly, “She’s the best. It’s just been a magical season in our life. Also pretty wild, but it’s a blessing to have her home. It’s been wonderful.”

He also reacted to the first family pictures Priyanka shared on her Instagram account on Mother’s Day. In the picture, the baby’s face was covered with a heart emoji. Nick adorably said, “There she is. She’s got a little heart face.”

Priyanka in the note had revealed that they brought Malti home after she had been in NICU for 100 days. The actress wrote, “On this Mother’s Day we can’t help but reflect on these last few months and the rollercoaster we’ve been on, which we now know, so many people have also experienced. After 100 plus days in the NICU, our little girl is finally home.”

Calling it a unique family journey, Priyanka said that every moment is precious and perfect for them. She even thanked the team of doctors who had been looking after the baby at the hospital in Los Angeles. She concluded the post by saying, “Our next chapter begins now, and our baby is truly a badass. Let’s get it MM! Mommy and Daddy love you.”

On the work front, Nick Jonas was last seen in

Chaos Walking.
He is yet to confirm his next acting project. Priyanka Chopra is gearing up for several Hollywood projects and is currently filming for Amazon’s

Citadel, She will also be seen in Bollywood film,