Pakistan Political Crisis: Countdown of PTI government begins, with whom will these three friends of Imran support Imran?
Advertisement 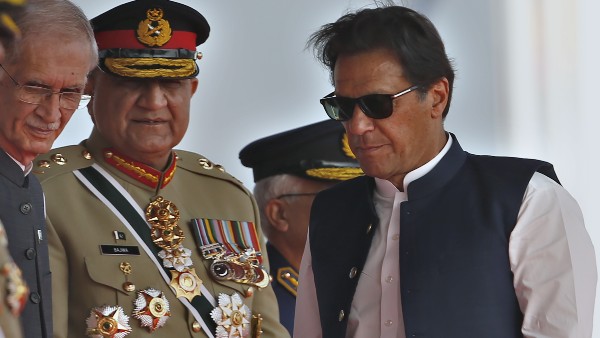 The future of the Tehreek-e-Insaf government will be decided with the vote on a no-confidence motion against Pakistan Prime Minister Imran Khan on April 3. At the same time, the political turmoil in Pakistan has increased over the letter shown by PM Imran Khan to the public. In the Islamabad public meeting, Prime Minister Imran Khan played the victim card fiercely in front of the public. Imran Khan left no stone unturned to seek the sympathy of the people. During the public meeting, he showed a letter claiming that he was receiving threatening letters from outside forces. Pakistan’s Information Minister Fawad Chaudhry has claimed that Imran Khan is ready to deliver threatening letters to the Chief Justice of the Supreme Court of Pakistan. Fawad Chaudhary said that this is a very serious matter. Threatening the Prime Minister of Pakistan is a matter of national security.

Imran’s government in all four of the figures
Imran’s government is now getting stuck in the tussle of figures. There are total 342 seats in the Parliament of Pakistan. The magic figure of majority is 179, enough for a party to sit in power in Pakistan. Earlier, Imran Khan had the support of 179 MPs. In which 155 MPs were from Imran Khan’s party Pakistan Tehreek-e-Insaf alone. Out of this, a total of 56 MPs had now become rebels. In such a situation, Imran Khan currently has the support of 123 MPs. Which is 49 less in number than the magic figure of Pakistan Parliament. If the number of these MPs is added to the opposition, then their number reaches 218. On this basis, it is now being said that now the Imran Khan government is falling in Pakistan.

PM Imran engaged in bargaining
Pakistan’s Prime Minister Imran Khan is now engaged in political bargaining. After rallying in Islamabad to save his chair, he has now started luring MPs on behalf of PTI ahead of the no-confidence motion in the National Assembly of Pakistan. Imran has offered to remove his party leader from the post of chief minister of Pakistan’s Punjab province to Parvez Elahi, leader of his ally Pakistan Muslim League Quaid (PML-Q). Earlier on Monday itself, Punjab CM Usman Bajdar has resigned. After the resignation of Usman Bajdar, the leaders of PML-Q met Prime Minister Imran Khan and announced his support in Parliament.

MPs of three parties will decide the future of Imran government