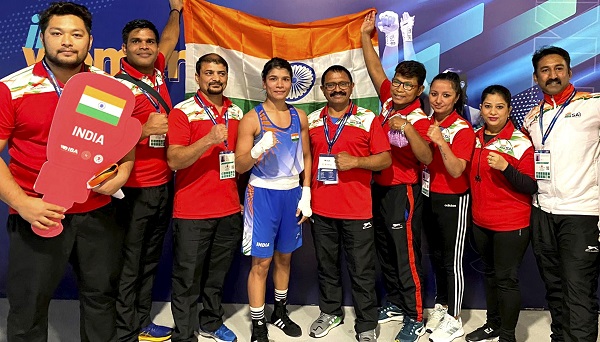 Signs of a golden future at the age of 14

At the age of 14, she appeared to be a future star as she won the World Youth Boxing Champion title.

But in 2017 she missed a full year due to a shoulder injury. Five years later, making pain and despair a distant memory, Nikhat claimed the flyweight (52kg) world champion crown with a victory over Jitpong Jutamas of Thailand.

Nikhat has carved his own path – Jameel

Emotional father Jameel told The Indian Express, “Winning gold at the World Championships is something that will inspire Muslim girls as well as every girl in the country to achieve great things in life. Wherever a boy or a girl, make your own way. And Nikhat has carved his own path.”

The game requires girls to wear shorts and training shirts, it was not easy for the Jameel family. The father worked as a sales assistant in Saudi Arabia for 15 years before deciding to shift to Nizamabad to supplement the children’s sports and studies.

‘Girl shouldn’t play such a game’

Nikhat’s two elder sisters are doctors. The younger sister plays badminton. The father told that sometimes, relatives or friends tell us that a girl should not play a sport that requires her to wear shorts. But we knew that we will support Nikhat whoever wants his dream.

After a shoulder injury in 2017, Nikhat returned to the ring with a bronze medal at the Senior Nationals besides winning the title at the Belgrade International in 2018.

Getting to senior level was not an easy road

He did not get a break in the Indian team for the 2018 CWG and Asian Games but was inspired by his father Jameel.

“When she won the World Youth title, she was 15 years old and it took her some time to understand that going from here to the senior level will not be easy,” he said.

The father told that whenever Nikhat missed a chance on the big stage in his career, his mind kept thinking about it. Then the stories of many boxers of Nizamabad were told to him, everything has a time. Nikhat had won title upon title at the junior level. Seeing Nikhat, two more Muslim girls participated in the National Boxing Camp and then the father told the daughter how she was becoming an inspiration to others.

Shifting yourself to the new weight category is the next challenge

Now Nikhat’s next challenge is to shift himself to the new weight category for the Paris Olympics 2022. She will prepare herself for 54kg. There will be new challenges in this. Before the Olympics are the Commonwealth Games and the Asian Games.

Favorite Biryani is being prepared

Bhaskar Chandra Bhatt, the national coach of the Indian women’s team, said, “Nikhat has the pace, which only needs to adapt to that weight.”

The Jameel family is preparing for the return of Nikhat. The father said, “For the last 2-3 years, she has missed her favorite biryani and nihari. Once she is free from the camp, she can enjoy the full taste of these for 1-2 days. After that She’ll be busy again.”

Never got a chance to play in the World Boxing Championship due to Mary Kom, now history is won by winning gold