'Play in Pakistan, Neeraj, if you win with Arshad, he will shower love with Pakistan as given to Milkha Singh'
Advertisement 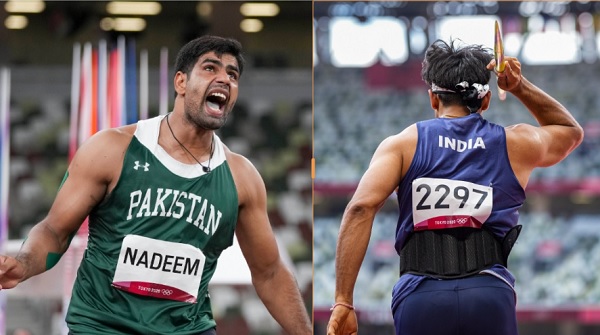 Arshad Nadeem in full preparation to compete with Neeraj

On Sunday, 7 August, Nadeem won the gold medal in the men’s javelin at the Commonwealth Games as his challenger Neeraj sat outside with an injury.

But Nadeem also threw a throw of 90.18m and became the first South Asian to cross the 90m mark. Chopra, who won a silver medal at the World Athletics Championships last month, has also failed to cross the mark.

Meanwhile, Bukhari said he would shower Chopra with lots of love and best wishes if India wins any tournaments later.

Speaking to The Indian Express, he said, “Most of the time, Arshad trains at Jinnah Stadium in Islamabad and Lahore, I wish Arshad and Neeraj would compete in a packed stadium in Lahore or Islamabad. Neeraj too like our son I promise you as a Pakistani that if Neeraj wins, we will show him the same love we showered on Milkha Singh ji when he won against Abdul Khaliq in Lahore in 1960. Athlete Games To share a common bond of love.”

Bukhari also said that Nadeem’s rise in the athletics world has inspired the youth to take up the sport of javelin. He also believed that the impact of Arshad’s performance in Pakistan could be similar to that of Chopra in India winning the gold medal in Tokyo.

Youngsters are showing enthusiasm to throw javelin in Pakistan too

He said, “After Arshad topped the Asian Games bronze and Tokyo Olympic qualification, I can say that I get to see 30-40 javelin throwers at almost every training ground in Lahore. In recent months, I have seen youngsters come from Khyber Pakhtunkhwa and Pakistan-China border areas to inquire about testing in Lahore. What Neeraj did for India, Arshad’s Olympic participation and today’s record can do the same in Pakistan “

‘Kaifu what is his problem’, hero in IPL, becomes zero for West Indies! Ravi Shastri asked a question