PM Kishida made a big statement about Ukraine in front of PM Modi, said - Japan will continue to help
Advertisement 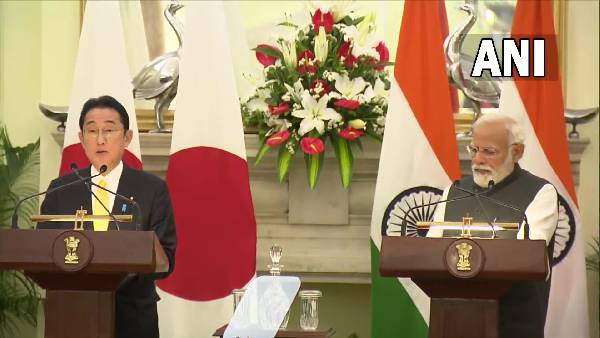 New Delhi, March 19: Japanese Prime Minister Fumio Kishida said in New Delhi on Saturday that the Russian invasion of Ukraine is a very serious issue, which is shaking the roots of the international order. During this, Prime Minister Narendra Modi was standing next to him. PM Kishida with PM Modi standing next to him at the joint press during the 14th India-Japan Annual Summit said that no one side should be allowed to use force to change the status quo in the world order. He said Tokyo would continue to support Ukraine.

In his statement, the Japanese PM said, “Today the whole world is shaken due to many incidents, it is very important to have a close partnership between India and Japan. We expressed our views, talked about Russia’s serious aggression in Ukraine. We need a peaceful solution based on international law.

Both our countries should increase efforts for an open & free Indo-Pacific. Japan, along with India, will keep trying to end the war & keep providing support to Ukraine & its neighboring countries: Japanese PM Fumio Kishida, following the 14th India-Japan Annual Summit pic.twitter.com/NDl1anEmhE

At the same time, he further said that both our countries should increase efforts for an open and free Indo-Pacific. Japan, along with India, will continue to seek to end the war and provide aid to Ukraine and its neighboring countries. Let us tell you that unlike fellow members of the Quad coalition (Japan, Australia and the United States) India has condemned Moscow’s actions in a three UN vote, calling only to stop the violence.

Russia has praised India’s “free and balanced” position after India pulled out of a UN resolution condemning Russia’s “aggression” against Ukraine. Remember that Russia remains the largest arms supplier to India. New Delhi and Moscow were close during the Cold War, a relationship that continues to this day.

New cases of corona continue to decline in the country, 1761 new cases in last 24 hours

After meeting the Japanese PM, PM Modi said, Japan will invest 3.2 lakh crores in the next 5 years