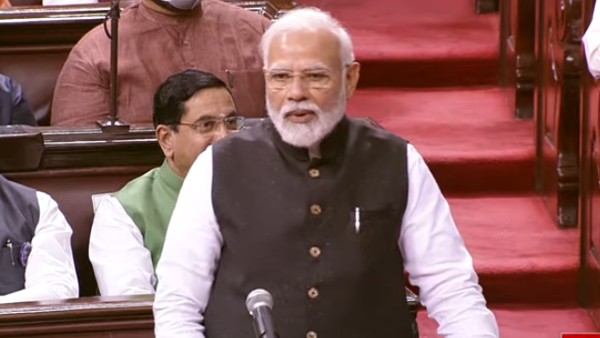 New Delhi, March 31: 72 members are retiring from the Rajya Sabha, the upper house of the Indian Parliament. On this, PM Modi also reached the Rajya Sabha on Thursday and addressed the retiring MPs. PM Modi said that our Rajya Sabha members have a lot of experience, sometimes experience has more power than academic knowledge. We will only ask the retiring members to come again by electing them. The PM further said that we have spent a long time in this Parliament. This house contributed a lot in our life. The experience gained as a member of this House should be taken to all the four directions of the country.

At the same time, Leader of Opposition in Rajya Sabha Mallikarjun Kharge said that there is a saying in politics that ups and downs often come but one should never leave the field. We have to keep this in mind while working for the people. Rajya Sabha is a permanent house, some members will retire while some others come, it will last forever. We may have differences but we have to make sure that we work efficiently. He said that Nehru gave power and intimacy to the Rajya Sabha. He made Rajya Sabha MPs members of various committees. Except for money bills, both the houses are equally powerful.

At the same time, Rajya Sabha Chairman M Venkaiah Naidu said that due to the uproar, the proceedings of the House are disrupted. In the last four years, the House lost more than 35% of its valuable functional time due to disruptions. This needs to be curbed before it is too late.

Tamil Nadu: SC rejects the decision of 10% reservation for Venniyar

Traveling on National Highway will be expensive from April 1, NHAI hikes toll tax by 10 to 15 percent