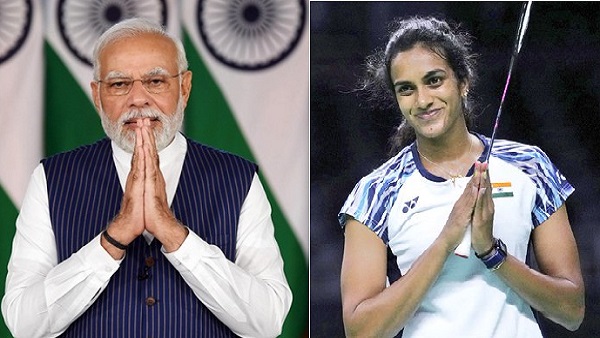 New Delhi, July 17.
Prime Minister Narendra Modi has congratulated India‘s star badminton player PV Sindhu on her victory in the final of the Singapore Open. PM Modi tweeted, “I congratulate PV Sindhu on winning her maiden Singapore Open title. She has again displayed exceptional sporting talent and achieved success. She has made the nation proud. Many more to come. Players will take inspiration from him.” PM Modi has retweeted the tweet of Union Minister Anurag Thakur.

Let us tell you that on Sunday, PV Sindhu defeated Wang Xie Yi of China 2-1 in the women’s singles final of the Singapore Open. In the three-set match, Sindhu won 2 sets, while the Chinese player won one set. Sindhu won the first set 21-9 and the third set 21-15. In the second set, Sindhu trailed 11-21. Let us tell you that PV Sindhu has won this year’s third and first title of Singapore Open. This is Sindhu’s first Super 500 title. Earlier on Saturday, Sindhu entered the final after defeating lower-ranked Saina Kawakami of Japan in the semi-finals on Saturday.

@pvsindhu1
on winning her first ever Singapore Open title. She has yet again demonstrated her exceptional sporting talent and achieved success. It is a proud moment for the country and will also give inspiration to upcoming players.

Let us tell you that the final match between PV Sindhu and the Chinese player lasted for a total of 58 minutes. After a stellar start in the first set, Sindhu stumbled in the second set, but in the third set she made a spectacular comeback to win the title.

12000 people came in support of Novak Djokovic, sought permission to play US Open, Djokovic is against the vaccine