Prithvi Shaw will not return to Delhi's team even against CSK, sad pictures for fans before the match
Advertisement 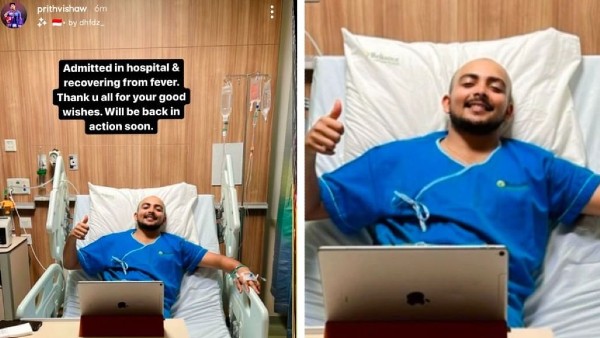 Prithvi Shaw had said that his health was not well.

Delhi Capitals team made 4 changes in the last match under which they dropped openers Prithvi Shaw and Axar Patel. These changes made by the Delhi team surprised everyone and after the match, when the team’s assistant coach Ajit Agarkar was questioned about it, he told that Axar Patel had to be dropped due to injury while Prithvi Shaw He had said that he was not feeling well, due to which he has been rested, although coach Agarkar had expressed hope that this explosive player would definitely be included in the team for the next match.

He had to be hospitalized due to fever

Meanwhile, sad pictures have come out for the fans of Delhi Capitals, after seeing which it is clear that Prithvi Shaw will not be able to join the team’s playing 11 even in the match against Chennai Super Kings. Actually Prithvi Shaw has shared a story on his official Instagram in which he is seen hospitalized. Along with this, Shaw has written that he has to be admitted to the hospital due to fever and he is currently getting his treatment.

In this post, Shaw has thanked the fans for their wishes regarding his health. It is worth noting that on Sunday, the threat of corona virus started looming again in the camp of Delhi Capitals when one of their net bowlers was found positive in the report of Kovid Test. After this, the entire team was again subjected to a Kovid test, in which it has been decided to continue the match only after getting the green signal.

Carlos Alcarez created history in Madrid Open, did a special feat against Nadal-Djokovic