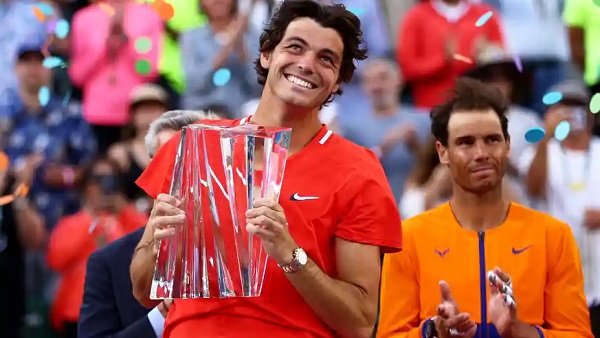 new Delhi. Rafael Nadal’s 20-match winning run of the season ended on Sunday after losing to local hope Taylor Fritz in the final of the Indian Wells Masters. Nadal, battling chest pain, suffered a 3-6, 6-7 (5) loss to Fritz, who recovered from an ankle injury to become the first American since Andre Agassi to win an Indian Wells title two years ago.

The house favorite Fritz gave fans what they came to see. Taylor, who won his second career title, said he was not even sure about going to court for the final due to unbearable pain following an ankle injury. Fritz said, “It’s one of those childhood dreams that you think will never come true. I can’t even describe how ridiculous it is how I could play today. I have never experienced worse pain in my life.

He continued, “If I had known it was going to be so bad, I wouldn’t have come here. I took a few steps to change direction and screamed and honestly I was trying to act tough.”

Meanwhile, Nadal was battling chest pain during a three-set semi-final clash with compatriot Carlos Alcaraz, 18. Nadal said, “When I’m breathing, when I’m moving, it’s like a needle all the time. I feel a little dizzy because it hurts. It’s not just about the pain, I don’t feel very well because it affects my breathing. More than hurting for a loss, (injury) is something that I accepted immediately and I’m honestly a little sore even before the match is over.”

World champion had a dangerous accident, bike jumped in the air, watch video