Rajya Sabha MP Manik Saha will be the new Chief Minister of Tripura, elected leader of the legislature party
Advertisement 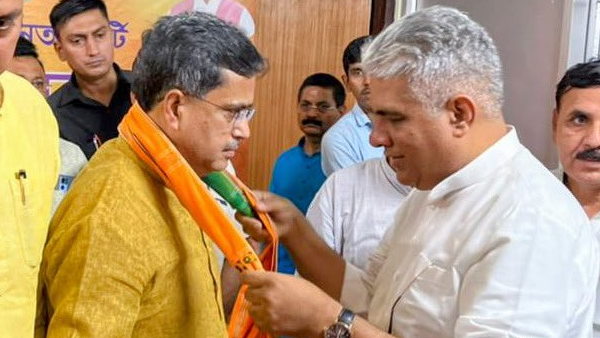 Agartala, May 14: After the resignation of Biplab Deb in Tripura, BJP has now announced to make Manik Saha as the new Chief Minister of the state. Manik Saha’s name was approved in the meeting of the BJP Legislature Party after the resignation of Biplab Deb. Manik Saha is the President of Tripura BJP and also a Rajya Sabha MP. According to sources, the name of Deputy CM Jishnu Dev Verma was also in discussion in the race for CM. Elections are to be held in Tripura in February 2023.

After the resignation of Biplab Deb, BJP appointed Union Minister Bhupendra Yadav and BJP General Secretary Vinod Tawde as central observers of the BJP Legislature Party meeting. Manik Saha’s name was stamped in this meeting held today. Deputy CM Jishnu Deb Burman and MP and Minister of State in the Central Government Pratima Bhowmiki were in this race. But the party reposed faith in Manik Sah. Soon he will take oath as the next CM of the state.

Manik Saha, a dentist by profession, is counted among the big leaders of the Bharatiya Janata Party. Presently he is the state president. Last month, he became a member of the upper house by winning the Rajya Sabha election. After making Dr. Manik the Chief Minister of the state, Biplab Dev can be made the BJP President of the state again. According to the information received from the sources, in view of the good hold in the organization, the central high command can again give this responsibility to him.

‘You will keep your tongue right, brother…’, Kumar Vishwas gave a strong reply to the minister on the statement of pani-puri