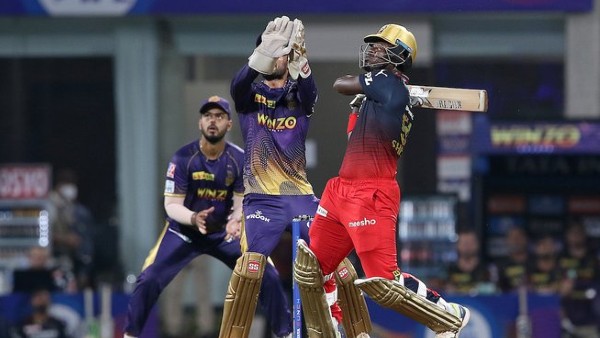 RCB team won the toss and decided to bowl first and on the basis of Akashdeep-Siraj’s bowling, KKR took 3 wickets in the powerplay. After this Vanindu Hasaranga (4 wickets) wreaked havoc on his bowling and took 4 wickets for just 20 runs. Harshal Patel also bowled superbly, putting two over maidens and took two wickets in his name. He became the first bowler after Siraj to bowl two maidens against a team in the same match. On the basis of Harshal Patel (2 wickets), Vanindu Hasaranga (4 wickets), Akashdeep (3 wickets) and Mohammad Siraj, KKR’s team could only score 128 runs and got all out.

In reply, RCB’s team had a very poor start and they lost their 3 wickets at the score of just 17 runs. Umesh Yadav took 2 wickets in his account during the powerplay, while Tim Southee took the wicket of Faf du Plessis. From here, David Willey (18) and Chefron Rutherford (28) shared a 45-run partnership and brought their team back in the low scoring match. Sunil Narine worked to break the partnership but Shahbaz Ahmed (27) shared a 39-run partnership with Rutherford to take the score beyond 100.

Meanwhile, when it seemed that the team of Royal Challengers Bangalore would easily win the match, Varun Chakraborty got Shahbaz Ahmed stumped at the hands of Sheldon Jackson and got his team back. After this Tim Southee did the work of turning the match and 18th took two wickets for just 7 runs. Southee first took the wicket of Rutherford on the second ball, then got Hasranga caught on the fourth ball.

Southee- KKR came back on the basis of Chakraborty but something happened in the 19th over which turned the tide. RCB needed 16 runs to win off 12 balls and had a chance to get a big run out in the second ball, in which Harshal Patel and Dinesh Karthik both reached one end but Umesh Yadav’s poor throw led to the dismissal. saved from After this, Harshal Patel reduced the gap by hitting two fours, while Dinesh Karthik hit a six and a four in the last over to give his team a 3-wicket win.

IPL 2022: Dinesh Karthik, captain Faf compared Dhoni with smoke in both the matches