RCB vs KKR: Kolkata scattered on the lines of Tu Chal Main Aaya, kneeling in front of RCB's bowling
Advertisement 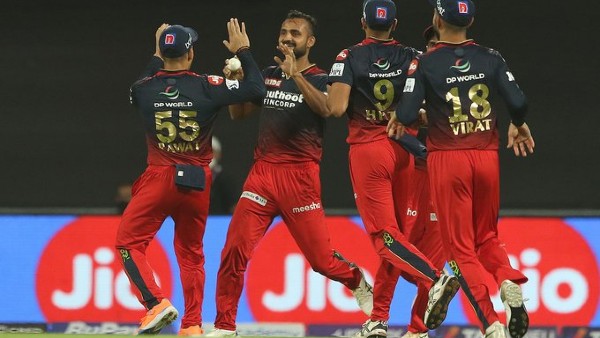 new Delhi. The sixth match of the 15th season of the Indian Premier League is being played at the DY Patil Stadium, where after defeating Chennai in the opening match, the Kolkata Knight Riders team came to play to take on RCB, although its batsmen did very poorly. Performed and on the lines of Tu Chal Main Aaya, the whole team got scattered. On the other hand, the RCB team which failed to defend 205 runs in the first match at the same ground, its bowlers performed tremendously and stopped the KKR batsmen from scoring big scores.

In this match played at the DY Patil Stadium, RCB captain Faf du Plessis won the toss and decided to bowl first, which his bowlers proved right and KKR’s team was bundled out for 128 runs in just 18.5 overs. KKR’s batsmen were so disappointed today that their players could not even play full overs.

Read more: ‘These franchises are battered in every department of the game’, former cricketer told who are the weakest teams of IPL 2022

Akash Deep shines in the powerplay

For RCB, Akash Deep did the job of getting the first breakthrough and Venkatesh Iyer (10 runs) was sent back to the pavilion after being caught and bowled on the score of just 14 runs. After this, Mohammad Siraj took the wicket of Ajinkya Rahane (9) in the 5th over to give the team the second success. At the same time, Akashdeep got the wicket of Nitish Rana in the last over of the powerplay. KKR’s team scored 44 runs inside the powerplay but lost their 3 important wickets during this period. Akash Deep ended his innings with 3.5 overs, 45 runs and 3 wickets.

On the other hand, Vanindu Hasaranga bowled brilliantly in this match, taking 4 wickets for KKR’s team and did not allow KKR’s team to recover from the initial blows. Hasaranga first took the wicket of Shreyas Iyer (13) after the powerplay, while Sunil Narine (12) was caught by Akashdeep and Sheldon Jackson was bowled by Vanindu. Hasranga took his fourth wicket as Tim Southee ended his spell for 20 runs.

Harshal Patel became the second bowler to do so

Harshal Patel also bowled brilliantly for RCB and took 2 wickets for just 11 runs in the spell of 4 overs. The special thing was that Harshal Patel bowled his first two overs maiden and took one wicket each in both the overs. He has become the second bowler in the history of IPL to bowl two maidens in the same spell. Earlier, Mohammad Siraj had done this feat against KKR.

On the other hand, for KKR, only Andre Russell played an innings of 25 runs in 18 balls with one four and 3 sixes, while Umesh Yadav (2 fours, one six) who came to bat at the bottom scored 18 runs. and made a partnership of 27 runs with Varun Chakraborty (10) to cross the team’s score by 100 runs.

In IPL 2022, the team is new but the problem is the same, the captaincy of KL Rahul should not be overshadowed by Lucknow.

‘These franchises are battered in every department of the game’, former cricketer told who are the weakest teams of IPL 2022