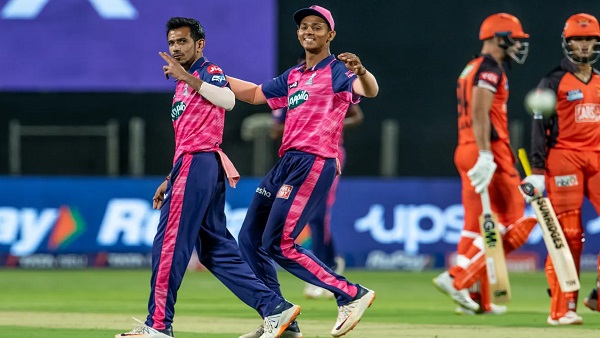 Pune : Sunrisers Hyderabad lost to Rajasthan Royals by 61 runs in the fifth match of the Indian Premier League 2022. Batting first, Rajasthan scored 210 runs for the loss of 6 wicketkeepers. In reply, Hyderabad team could score 147 runs for the loss of 7 wickets. There was excellent bowling from spinner Yuzvendra Chahal, who took 3 wickets for 22 runs in 4 overs, while Trent Boult and famous Krishna got 2-2 wickets in the account.

For Hyderabad, Aiden Markram played an unbeaten 57 off 41 balls. At the same time, number eight Washington Sundar scored 40 runs in 14 balls, which included 5 fours and 2 sixes. Hyderabad’s record in this match was embarrassing. Hyderabad scored the lowest run in the powerplay in IPL history. In the first 6 overs of the match, Hyderabad could manage only 14 runs for the loss of 3 wickets.

Also read- Revealed: KL Rahul got government job, mother taunts him for not having degree

Earlier, Hyderabad won the toss and decided to bowl first. Rajasthan batsmen scored 210 runs in the allotted 20 overs for the loss of 6 wickets. Playing for Rajasthan, Sanju Samson scored 55 runs in 27 balls in the 100th match, which included 3 fours and 5 sixes. This was his 16th fifty in the IPL. Opener Jos Buttler scored 35 runs in 28 balls. He shared a 58-run partnership with Yashasvi Jaiswal for the first wicket. Jaiswal scored 20 runs in 16 balls. Romario Shepherd of the Windies, who made his IPL debut, gave Hyderabad the first breakthrough by dismissing Yashasvi. Then Umran Malik got Jos Buttler caught by wicketkeeper Nicholas Pooran. He scored 35 runs in 28 balls with three fours and three sixes. Samson then shared a 41-ball 73-run partnership for the third wicket with Devdutt Padikkal. Meanwhile, Padikkal missed out on a half-century. He scored 41 runs in 29 balls, which included 4 fours and 2 sixes.

Samson was also out after Padikkal was dismissed. After this, Shimron Hetmyer, who came at number 5, scored 31 runs in just 13 balls, which included 2 fours and 3 sixes. He shared a partnership of 44 runs in 19 balls with Riyan Parag, due to which the team reached 200. Then in the last over, T Natarajan dismissed Hetmyer and Riyan Parag. Parag was dismissed for 12 runs off 9 balls, while Nathan Coulter-Nile remained unbeaten on 1 run.