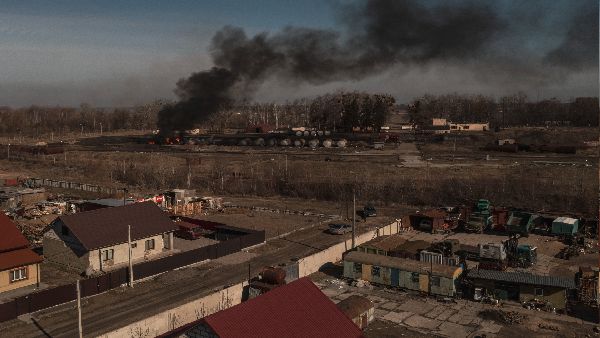 New Delhi, March 20. The conflict between Russia and Ukraine is escalating. Ukrainian President Volodymyr Zelenskyy has said that children were killed in the Russian attack. Despite this, the speed of the attack of the Russian army is increasing. So far, there has been heavy destruction in many major cities of Ukraine. Many multi-storey buildings have collapsed in residential areas. The citizens of Ukraine are paying a heavy price for this conflict. A 9-year-old girl who was injured in firing by Russian soldiers has lost her left arm.

The conflict between Russia and Ukraine started on 24 February. The fierce war between the two countries continues even on the 25th day. Both the countries are suffering heavy losses in the attack. Ukraine is paying a heavy price for this. The Russian army is also carrying out attacks in the residential areas of Ukraine. In the war-torn country, there is a situation of conflict over the basic needs of the people. People are longing for drinking water and food items.

9 year old girl’s father dies
A 9-year-old girl underwent surgery to save her life, in which doctors had to amputate her hand. The girl’s name is Sasha. The incident happened when she was leaving Hostomel with her family. During this, she came under the fire of Russian soldiers near Hostomel in West Kyiv. He lost his father in an attack by Russian soldiers. The girl said- ‘I don’t know why the Russians shot me. I hope it was an accident and they didn’t mean to hurt me.

girl lost her left hand
According to a media report, 9-year-old Sasha, sitting on the bed of Kyiv hospital, remembers the painful accident in which she lost her father. Sasha says “I was shot in the arm. I ran after my sister, then I lost consciousness. Someone took me to a basement. I was given some treatment there and then some people took me to the hospital.” This incident (Girl gunned down) is from the third week of the Russia-Ukraine war. Due to heavy devastation in Ukraine, civilians are being forced to flee there. Sasha and her family are also forced to leave Ukraine. When Shasa’s father, mother and sister were on the run from Ukraine, their car was fired upon. Shasa’s father was killed by the bullet. During this, after being shot in the hand, Sasha fainted. When he regained consciousness two days later, he came to know that he was on a hospital bed. The rescue team took him to the hospital in critical condition. Doctors had to amputate most of Sasha’s left hand during the operation to prevent infection.

Vicky Kaushal sweats it out in the gym after a night out dinner with Katrina and family, posts gym selfie