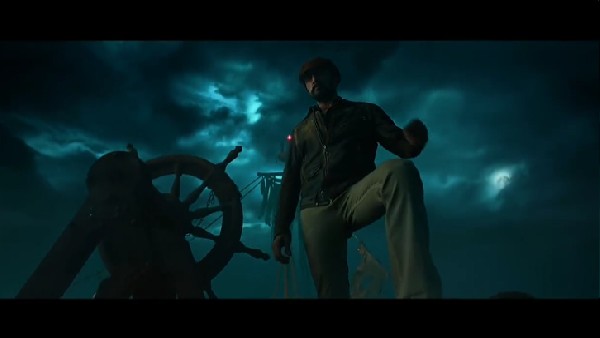 There can be no bigger news for the fans of Kicha Sudeep than the teaser of his upcoming pan-India mega venture ‘Vikrant Rona’ is finally out! The teaser of this 3D fantasy action adventure features Badshah Kichha Sudeep as ‘Vikrant Rona’ aka the Lord of the Dark, who seems to strike fear in the hearts of his enemies. One can feel a glimpse of the massive cinematic experience in this teaser, as one can expect from the film.

It depicts the anti-heroic entry of the superstar on the big screen as Vikrant Rona. Let me tell you, the film is being promoted on a very big level so that the enthusiasm of the audience remains and taking their enthusiasm one level higher, the makers have made it Hindi, Telugu with 4 superstars-Salman Khan, Chiranjeevi, Mohanlal and Simbu. Teaser has been launched in Malayalam and Tamil.

It is no surprise now, especially when the makers are launching Vikrant Rona’s Tak teaser in the most extraordinary and innovative way. Well, from its title launch on The Burj Khalifa to bringing Jacqueline Fernandez on board and even announcing a release in over 50 countries, ‘Vikrant Rona’ has been in the news for every reason.

Let us tell you, ‘Vikrant Rona’ which will see Kicha Sudeepa, Jacqueline Fernandez, Nirup Bhandari and Neeta Ashok, is presented by Zee Studios. It is produced by Jack Manjunath under his own production Shalini Arts and co-produced by Alankar Pandian of Invenio Origins. It is directed by Anoop Bhandari. ‘Vikrant Rona’ is scheduled to release nationwide on July 28.

The world will witness the glory of

@KicchaSudeep
wishing the best to the team.