Salman reached the stage after taking off his shoes to pay tribute to Balasaheb Thackeray, fans liked the video
Advertisement 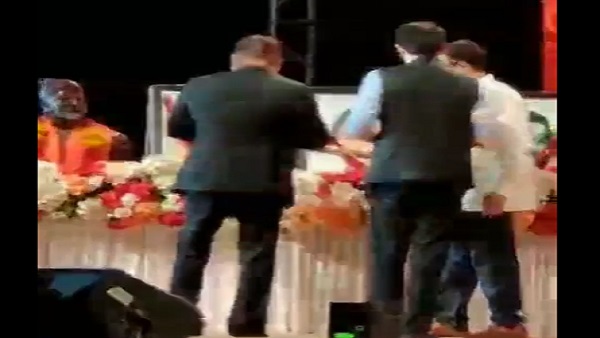 Salman did this work

Actually, this was the stage for the trailer launch of Marathi film Dharamveer, where Salman Khan also reached. During this program, Salman Khan took off his shoes before offering flowers to Balasaheb Thackeray’s photo and then went to the stage. However, apart from Balasaheb, there was a photo of Chhatrapati Shivaji Maharaj and Balasaheb’s wife Meenatai Thackeray on the stage. Apart from this, there was also a photo of the late Anand Dige on the stage, on whose life the film was made. Salman took off his shoes before garlanding all these photos and after that went and paid tribute.

Salman Khan’s video has now gone viral on the internet. This video is constantly being shared on social media by many fans. It is seen in the viral video that Maharashtra Chief Minister Uddhav Thackeray and his son Aaditya Thackeray had also reached the event. Apart from these, many film stars were present in this program. Apart from Salman Khan, his co-star Bhagyashree, actor Jackie Shroff were also present on this occasion.

Salman has many projects on the work front

This video of Salman Khan has left a deep impression on the hearts of the fans. Let us tell you that on the work front, Salman Khan was last seen in Mahesh Manjrekar’s film ‘Antim’. Salman’s brother-in-law Aayush Sharma was also in this film. He has also announced the second part of Bajrangi Bhaijaan. Apart from this, Salman has ‘Kick 2’ and ‘Tiger 3’ with Katrina Kaif and ‘Kabhi Eid Kabhi Diwali’ with Shahnaz Gill.

After the terrorist attack in Mohali, Mann government on the target of opposition, Punjab Congress gave this advice

Who was the British woman who called Mahatma Gandhi a ‘child in politics’?