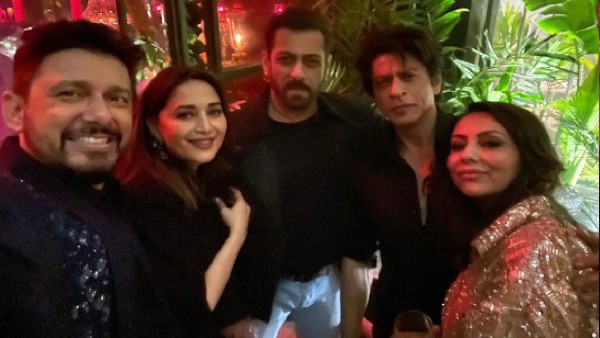 Salman Khan, Shah Rukh Khan and Madhuri Dixit have been seen in one frame but the news that is coming out at this time is fantastic. All this has been possible in Karan Johar’s birthday party, from where many stunning pictures have gone viral. The birthday party was attended by big names of Bollywood, including Kareena Kapoor, Shah Rukh Khan, Aishwarya Rai, Abhishek Bachchan, Saif Ali Khan, Katrina Kaif, Vicky Kaushal, Ranveer Singh.

Shah Rukh Khan was also at the party and his dance moves completely stole the show. Now, we come up with an epic picture of the OG of Bollywood, featuring Salman Khan, Madhuri Dixit and Gauri Khan.

Actually Madhuri Dixit has shared a picture in which apart from her husband, Salman Khan, Shah Rukh Khan and Gauri Khan are seen. “Shah Rukh Khan was present at Karan’s birthday party.

He arrived at the venue but made a very private entrance through a different gate. This was to avoid being clicked by the paparazzi. One reason for this was also that he did not want to show his look.

Let us tell you that superstar Shahrukh Khan and his film Pathan and Dunki are busy and shooting continuously. Her first film with Rajkumar Hirani is Dunki and it is sure to be a big bang in the coming times. Salman Khan is busy with his film Tiger 3 and Kabhi Eid Kabhi Diwali has also come on the floor.

Nargis Fakhri’s bad accident, she fell on her face while riding a bicycle, terrible VIDEO viral