SC Judges: 34 Supreme Court judges come from 15 states, know from which state the most
Advertisement 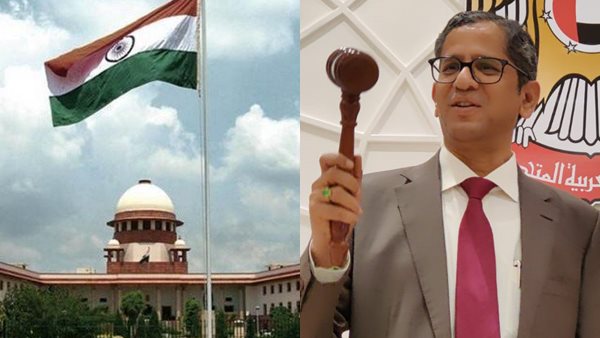 When it comes to the Supreme Court, the first picture that comes to mind is the Chief Justice of India (CJI). At present, Justice NV Ramana, a jurist from Andhra Pradesh, is holding the position of Chief Justice in the Supreme Court. Justice NV Ramana was born in Krishna district of Andhra Pradesh. After graduation in science (B.Sc.) he took law degree. In February 1983, he registered as a lawyer. After this he practiced in the Andhra Pradesh High Court. In the Supreme Court, Ramana was seen pleading in civil, criminal, constitutional, labour, service and electoral matters. Ramana, specializing in constitutional, criminal, service and inter-state river laws, first became a judge in the Andhra Pradesh High Court in the year 2000.

It is worth noting that Justice NV Ramana has expressed concern many times regarding pending cases in the judiciary. The Supreme Court Collegium headed by him has recommended the appointment of judges at a faster pace to fill up vacant posts in courts. Recently, the swearing-in of nine judges became the first incident in the history of the court.

Justice D.Y. Chandrachud, Justice Sanjay Kishan Kaul, Justice Hima Kohli, Justice Hrishikesh Roy and Justice Sanjiv Khanna are either Delhi-born or these legal professionals have law degrees from a Delhi college. Justice Chandrachud’s father has also been a judge. In May 2016, Justice Chandrachud became a Supreme Court judge for the first time. Prior to this, he was the Chief Justice of the Allahabad High Court, Uttar Pradesh.

Before becoming a Supreme Court judge, Justice Hrishikesh Roy was appointed a permanent judge in the Gauhati High Court of Assam in 2008. Roy has also served in the National Judicial Academic Council (NJAC) headed by the Supreme Court Chief Justice. He also served as the Chief Justice of the Kerala High Court. He holds a Bachelor’s degree in Law (LLB) from Delhi University.

Justice Hima Kohli became the Chief Justice of Telangana High Court in 2021. Born in Delhi in September 1959, Justice Kohli did her schooling from St. Thomas’ School. He then completed his PG in History from St. Stephen’s College, University of Delhi. He went to the Law Faculty of Delhi University, Campus Law Center for law studies (L.L.B.) and obtained a law degree in the year 1984.

Justice Sanjiv Khanna was born in May 1960. He completed his law studies from Delhi University’s Campus Law Center in 1980 after graduating from Delhi University. In 1983, he got registered with the Delhi Bar Council. After 21 years of practice, Justice Khanna became an additional judge of the Delhi High Court in June 2005. Justice Khanna was elevated as a judge of the Supreme Court in January 2019 after becoming a permanent judge in the High Court.

Besides Justice NV Ramana, Justice BV Nagarathna, who was sworn in as Supreme Court Justice last year, was a judge of the Karnataka High Court before reaching the apex court. He is ranked 33rd in the country in terms of seniority of High Court judges. He started advocacy in 1987. After 23 years of practice, BV Nagarathna was appointed as an additional judge in the High Court for the first time. After becoming a permanent judge on 17 February 2010, the Supreme Court Collegium recommended the elevation of Nagarathna to the apex court. According to media reports, Nagaratna can achieve the distinction of becoming the first woman Chief Justice of India. According to the order of seniority, Justice Nagarathna can hold the post of Supreme Court Chief Justice from February 2027 to October 2027. Justice BV Nagarathna is the daughter of former Chief Justice of Supreme Court ES Venkatramaiah.

The two other judges, who belong to Andhra Pradesh or Telangana, are Justice L Nageswara Rao and Justice PS Srinarasimha. Justice Narasimha is the first judge to reach the bench from the bar. Narasimha, who has served as the Additional Solicitor General, has reached the apex court in August 2021 only when he became a nine-judge Supreme Court judge.

Notification regarding the appointment of Justice Jamshed Burjor Pardiwala has been issued. Justice Pardiwala, posted in the Gujarat High Court, comes from the Parsi community. Justice Pardiwala will be the fourth Parsi to become a Supreme Court judge. Justice Pardiwala is a fourth generation Legus Professional in the family of lawyers. His father Burjor Kawasji Pardiwala had practiced for 52 years in Valsad and Navsari districts. The grandfather and great-grandfather of Justice JB Pardiwala were also lawyers. Both practiced in Valsad and Navsari districts. According to news agency ANI, it is likely that Justice Pardiwala will serve as the Chief Justice of India for a term of about two years and three months. It is also interesting that a judge coming from the minority community is being promoted to the Supreme Court after a long gap of five years. Earlier, Justice S Abdul Nazeer was elevated to the Supreme Court in February 2017.

UP is the largest state in India in terms of population and Lok Sabha seats. To reduce the pressure of pending cases in the courts and in the interest of the people of the state, two benches of the High Court in UP – Allahabad High Court and Lucknow Bench. For a long time there has been a demand to make more benches, but it is still pending. Three legal professionals from such a large state are serving as Supreme Court judges.

One Justice each from Punjab, Madhya Pradesh, Haryana, Uttarakhand

The notification for the appointment of Chief Justice of Gauhati High Court Sudhanshu Dhulia to the Supreme Court has been issued. He is only the second judge from Uttarakhand, popularly known as Dev Bhoomi, to become a Supreme Court judge.

Justice Dhulia had his early education in Dehradun and Allahabad, after which he went to Sainik School, Lucknow. He did his graduation and law degree from Allahabad University. During his school and college days, Dhulia actively participated in debates. After obtaining a law degree, he served in the Uttarakhand High Court first as Chief Standing Counsel and later as the Additional Solicitor General of the State of Uttarakhand.

‘Leave a career and enter politics, God will not give death till India becomes number one in the world’: Arvind Kejriwal