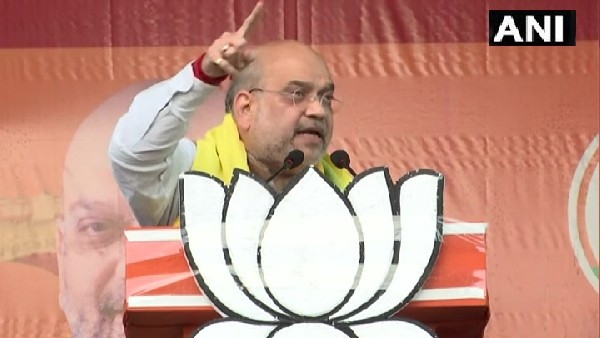 Darjeeling, 05 May: Union Minister Amit Shah, while addressing a public meeting in Siliguri, West Bengal, attacked the Mamata Banerjee government fiercely. Amit Shah addressed a public meeting at the Railway Institute Ground here. During this, he took a dig at Mamta government and said that BJP will continue its fight for the state. In the rally, Amit Shah said that Mamta didi, even after electing you 3 times, you are not improving, till you do not end the rule of atrocities, corruption, catastrophe and syndicate on the people of Bengal, BJP will continue its fight.

Amit Shah on CAA: Amit Shah said – CAA will be implemented as soon as the wave of Covid ends. oneindia hindi

At the same time, referring to the Birbhum case, Shah said that if anything happens across the country, Mamta didi sends a delegation of TMC. Didi, 8 women and 1 child were burnt alive in Birbhum, why didn’t you send a delegation there? Are you not your people from Birbhum? Shah did not stop here, he further said, ‘Mamata didi has made Bengal financially poor. Bengal accounted for 30% of the country’s GDP in 1947, which was reduced to 3.3% in 2022. Mamta didi will you answer to the people of Bengal?

#WATCH TMC is spreading rumors about CAA that it won’t be implemented on ground, but I would like to say that we’ll implement CAA on ground the moment Covid wave ends…Mamata Didi wants infiltration…CAA was, is & will be a reality:Union Home Minister Amit Shah in Siliguri, WB pic.twitter.com/E1rYvN9bHM

On the issue of CAA, Shah said that TMC is spreading rumors about CAA that it will not be implemented on the ground, but I would like to say that we will implement CAA on the ground, as soon as the wave of Kovid ends… Mamta didi wants infiltration… CAA was, is and will be a reality.

Home Minister Amit Shah targeted the Mamta government and said that Bengal has the highest electricity price in the entire country. If the price of petrol in the country is Rs 115, then it is in Bengal. Where there is a BJP government, petrol is available for Rs 105. Even today the poor here do not get the benefit of the Ayushman Bharat scheme.

CM Mamta Banerjee countered the statements of Home Minister Amit Shah. He said in his statement that he is the Home Minister, so he should see Delhi. They should see what happened in Delhi’s Jahangirpuri, Uttar Pradesh and Madhya Pradesh. They don’t have Bengal so they shouldn’t talk about Bengal like that. BJP’s job is to create division.

At the same time, on the issue of CAA, Mamta Banerjee said that the CAA bill has ended. Why are they not bringing this bill in Parliament? I do not want the rights of citizens to be curtailed. We all have to live together, unity is our strength. Today, he (Amit Shah) had come here to infiltrate the political arena of BSF.

The government will now give favorite mobiles worth Rs 9 thousand to the number-holders: Dushyant Chautala