Shahnaz Gill unfollowed Salman Khan, was out of debut film Kabhi Eid Kabhi Diwali, is this the reason?
Advertisement 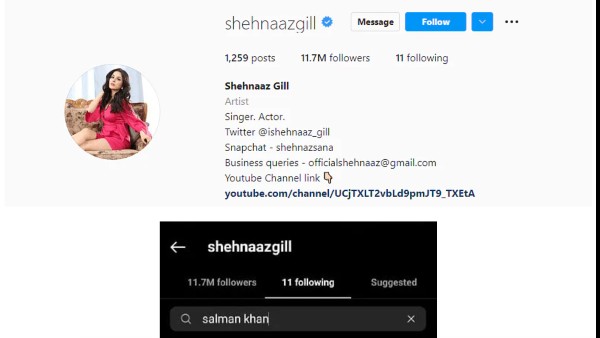 The news of leaving the film has already come

It is worth noting that Salman Khan’s film Kabhi Eid Kabhi Diwali, Shahnaz Gill has left this news has already come. When all the actors were going out of this film, there were reports that Shehnaaz too had doubts about her debut film and she too had decided to leave the film. However, all these news turned out to be false. Anyway, Shahnaz Gill is a fan of Salman Khan, in such a situation, no one was able to leave Salman’s film.

Ever since the news of Shahnaz Gill signing Kabhi Eid Kabhi Diwali, there have been rumors that Shehnaaz Gill is getting exorbitant fees for this film. Salman Khan told Shehnaaz Gill that she can openly tell the fees she charges and she will be given the same fee. Significantly, after the death of Siddharth Shukla, Shehnaaz Gill was strongly supported by the entire industry.

Shehnaaz Gill has also completed a schedule of Kabhi Eid Kabhi Diwali in Hyderabad a few months back. When she returned to the airport, her pictures and videos were quite viral. On the other hand, Shahnaz also shared pictures and videos with co-stars Raghav Juyal and Siddharth Nigam, in which the three young stars were seen having fun. Shehnaaz Gill will be seen romancing Siddharth Nigam in this film.

Why are the rumors of leaving the film flying?

Now the rumors of Shehnaaz’s exclusion from the film are flying fast because Salman Khan is no longer visible on Shahnaz’s Instagram account. However, Salman also gives a lot of attention to Shehnaaz and fans have been watching this since season 13 of Bigg Boss and the reason for paying attention is that Shehnaaz wins everyone’s heart in a jiffy.

What is the reason for Sanju Baba’s show?

The reason for Shehnaaz Gill leaving this film could be Shehnaaz Gill’s upcoming concert with Shehnaaz, Sanjay Dutt and Arshad Warsi. Sanjay Dutt is going to do a concert named Sanju Baba Chale America which will be held in UK and Shahnaz Gill will also be a part of this concert. Things haven’t been going well between Sanjay Dutt and Salman Khan for a long time and Shehnaaz’s concert is being said to be the reason for her expulsion from Salman’s film. Although these are just pure rumours, which have no head or feet.

Has Palak Tiwari replaced him?

Now on one hand, while the rumors of Shehnaaz leaving the film have intensified, there is another rumor that Shehnaaz Gill has now been replaced by Shweta Tiwari’s daughter Palak Tiwari who will be seen romancing Siddharth Nigam in the film. . The pairing of Palak and Siddharth also looked better than the pair of Shahnaz and Siddharth.

Now it is not known whether Shehnaaz Gill will debut with Salman Khan’s film or not, but at the moment, Shehnaaz is signing more projects in her career. She has recently signed a film of Rhea Kapoor which is being directed by Rhea Kapoor’s husband, Karan Boolani. The film is a family drama starring Riya’s father Anil Kapoor and Bhumi Pednekar in lead roles.