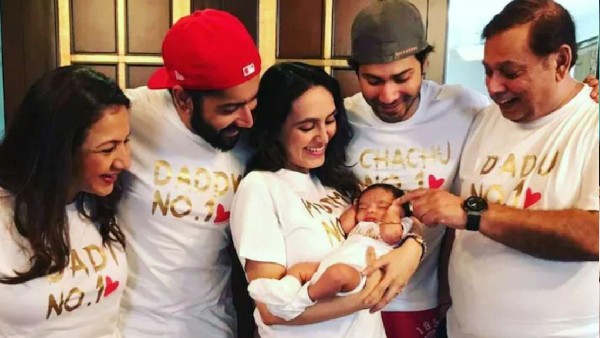 Varun Dhawan got married some time back and at this time good news is coming from his house. No, not Varun Dhawan but his elder brother, Rohit Dhawan and his wife Jhanvi were blessed with a child. This is their second child together. Rohit, who is a film producer, married Jhanvi in ​​February 2018 in a private ceremony in Goa. In the same year, the couple welcomed their first child.

Natasha Dalal had earlier hosted a beautiful baby shower for husband Varun Dhawan’s sister-in-law Jhanvi Dhawan. Anshula Kapoor, who was among the guests, also shared some pictures of the event on social media.

Rohit Dhawan and his wife Jhanvi have now welcomed their second child, baby boy. In a video shared on Instagram on Wednesday, May 4, Rohit is seen leaving the hospital.

In the video, the filmmaker is seen wearing a blue casual shirt as he comes out of the hospital with his father David. Later, the paparazzi can be heard saying “Congratulations Rohit sir” as the two got into the car.

Rohit Dhawan and Janhvi Dhawan dated for seven years before tying the knot in Goa in February 2012. His wedding was attended by celebrities like Ranbir Kapoor, Ameesha Patel, Rishi Kapoor, Sonam Kapoor, Govinda and many more. The couple welcomed their first child, a daughter named Niara in 2018. Meanwhile, Rohit made his directorial debut in 2011 with Desi Boyz.

‘You both get married’ – Fans said after seeing Salman Khan and Karisma Kapoor hugging!