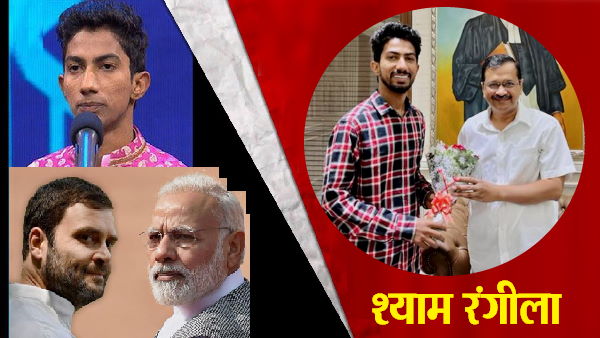 Know who is Shyam Rangeela

Shyam Rangeela is from Rajasthan. He is 27 years old. He was born on 25 August 1994 in Mankatheri village of Pilibanga town of Hanumangarh. In the year 2013, his parents left Mankatheri and moved to a new place. Presently his family lives in Mokamawala village of Raisinghnagar town of Sriganganagar district. His father Jawahar Lal is a farmer. He is from Hindu family.

Completed studies in Jaipur after village

Shyam had studied up to 8th standard in Manaktheri village itself. After that studied in Suratgarh till class XII. Then he did animation course in Jaipur till 2012-15. Shyam dreamed of becoming a comedian in his childhood. That’s why he started doing mimicry from the days of his studies. Shyam Rangeela, now known in the Internet world as Mimicry Artist, is an Indian comedian.

Modi got fame by copying

As a comedian, Shyam was seen in the world when he mimicked Prime Minister Narendra Modi. During the Corona-Lockdown, he made many videos one after the other and uploaded it on his social media channel. Through those videos, he exposed the failure of the government.

Have copied Rahul Gandhi too

Shyam also grabbed public attention when he performed in The Great Indian Laughter Challenge, imitating Congress leader Rahul Gandhi. In the same show, he got a standing ovation from judge Akshay Kumar. Earlier, he had performed at an institute in Jaipur, imitating several politicians.

Rangeela came in such politics

In terms of politics, Shyam praised Arvind Kejriwal’s government on several occasions. He was inclined towards ‘Aap’. Now Shyam Rangeela has become a part of “AAP”. During this, he took the membership of the party at the hands of Arvind Kejriwal. He then tweeted- “Rajasthan also needs ‘politics of work’, and that’s why we are with ‘politics of work’ and ‘AAP’.”