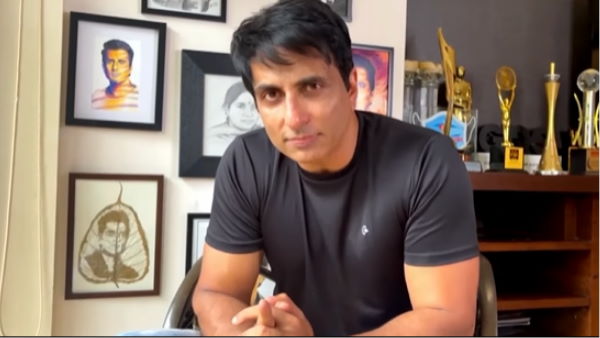 Mumbai, May 28: Actor Sonu Sood is not only famous for his strong acting in Bollywood but he is also known for his strong acting in South’s films. His fan following is very good in South India as well. Sonu Sood likes to work in films as well as working for people in real life. During the Corona period, he had transported several thousand needy people to their homes at the time of lockdown. Not only this, even after this, he tries his best to help the people who need him in the society. Let us tell you that Sonu Sood started his career with Tamil film and then he also worked in Telugu films. After this Sonu started working in Hindi films. In the year 2002, Sonu made his entry in Hindi films with ‘Shaheed-e-Azam’. He has also appeared in Salman Khan’s film Dabangg. At present, many films of Sonu are ready for release, which include films from both Hindi and South world. Meanwhile, now Sonu Sood has given such a statement regarding Hindi and South films which is going viral on social media. People are seen making many types of comments on this statement of Sonu.

Sonu said this big thing about Bollywood
Actually Sonu said that by working in South Indian films, he avoids working in bad Hindi films. Talking to Indian Express, Sonu said- I have always been picky about my scripts. Whether I do Tamil, Telugu or Hindi films but my script should be good. South films save me from doing bad Hindi films. Otherwise there comes a phase when you work just because you only have to be in a big film. So South films keep me away from all this. After this statement of Saunu Sood, people are making many types of comments. Some people say that Sonu works in so many Hindi films, so he should not have spoken these things for Bollywood. At the same time, some of his fans are saying that Saunu has told his own past. Meanwhile, some people are also criticizing Sonu Sood.

This big character will play in ‘Emperor Prithviraj’
Let us tell you that Sonu Sood was recently seen in the Telugu film ‘Acharya’. He was in the role of Villain in this film. Chiranjeevi and Ram Charan were in lead roles along with Sonu in the film. Now Sonu is going to be seen in Bollywood film Samrat Prithviraj. Akshay Kumar and Manushi Chillar will be with her in this film. Sonu Sood is playing the role of poet Chand Bardai in this film. Regarding his character in this film, Sonu said in the interview – When I heard the story of Chand Bardai, I was very inspired. I never thought that I would get a chance to play the character of Chand Bardai. I wish my mother was alive, she would see me and tell whether I did the right thing or not.

These Bollywood beauties are fitness freaks, maintain themselves like this even in busy schedules

After 20 years.. these big stars were seen in a frame, the fans were delighted to see the photo