'He used to sleep without having a full meal, but did not tell his mother', remembering the days of struggle, the RR bowler got emotional

'Looks like I am talking to the wall', Dravid-Lakshman's funny meeting happened again

'He can be the captain of CSK for a long time', Sehwag said - Dhoni has all the qualities in him 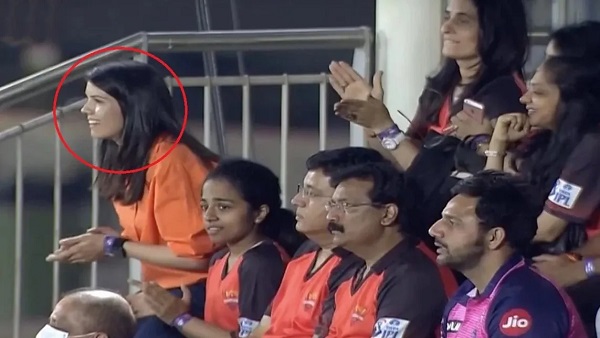 Wicked when the wicket fell

The video of Kavya’s reaction went viral when Rajasthan’s wicket fell. In the seventh over of Rajasthan’s innings, Hyderabad bowler Romario Shepherd took the wicket of opener Yasvi Jaiswala. As soon as Shepherd took the wicket, the cameraman turned the camera towards Kavya Maran and her reaction was captured on camera. As soon as she got the wicket, Kavya got up from her chair and started clapping with a smile on her face.

Fans were eager to see

Even before the start of the match, his mistress Kavya Maran was discussed more than the Hyderabad team. Fans were desperate to see him in the stadium. As the cameraman swung the camera at her, several pictures and videos of Kavya’s reaction went viral on social media, which are now being well-liked. Kavya also came in IPL 2022 Mega Auction, since then she is seen in limelight.

Let us tell you that during the match Kavya Maran’s fans were also seen in the stands. He had come with a poster for them. Due to the beauty of Kavya, her fan following is also enough. Kavya did her B.Com from Stella Maris College, Chennai. And his father Kalanidhi Maran is also the owner of Sun TV. B.Com. After that Kavya has done internship in many departments of Sun TV. After this she did MBA from New York University and came to India and started watching Sunrisers Hyderabad team.

This player became a star because of Gautam Gambhir, was never in the news earlier