SS Rajamouli's 'RRR' becomes the first film to promote by visiting the Statue of Unity!
Advertisement 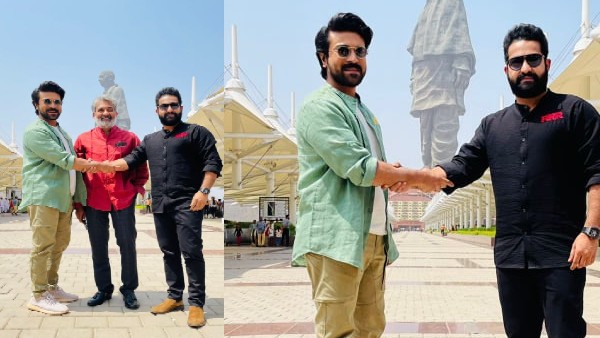 With India’s renowned filmmaker SS Rajamouli’s ‘RRR’ just a few days away from release, the makers of the magnum opus had planned a multi-city tour to promote the film tremendously. It was followed by the pan India cast of the film on a journey, in which director SS Rajamouli along with actors Jr NTR and Ram Charan visited the Sardar Vallabhbhai Patel Statue of Unity now in Vadodara, after Bangalore, Hyderabad and Dubai.

Interestingly, with this ‘RRR’ has become the first film to visit the historical monument of India. Recently, the makers and cast of the film shared their latest pictures from the journey, which came as a surprise to their fans and added to the anticipation even further.

Thus from Hyderabad, Bangalore, Vadodara, Delhi, Amritsar, Jaipur, Kolkata and Varanasi to Dubai, the makers have devised a massive promotion plan, wherein they will take the lead in the promotion of the film from March 18-22. Will visit potential markets. Interestingly, setting another benchmark,

India’s biggest action drama, SS Rajamouli’s RRR is the first Indian film to be released in Dolby cinema. The film includes a star-studded lineup apart from Ram Charan and Jr NTR. Apart from these two mega power stars, Ajay Devgn, Alia Bhatt, Olivia Morris will be seen in important roles in the film while Samuthirakani, Ray Stevenson and Alison Doody will be seen sharing the screen in supporting roles.

Jayanthi Lal Gada of Pen Studios has acquired theatrical distribution rights across North India and has also purchased the worldwide electronic rights for all languages. Whereas, Pen Marudhar will distribute the film in the North Territory. Telugu language period action drama film produced by DVV Danayya of DVV Entertainments. RRR is set to release on 25 March 2022.

Anupam Kher’s mother Dulari shared the grief of being a Kashmiri Pandit in the video: Brother left home overnight and died