Sunil Chhetri's amazing in international goals, equaled the legend in scoring the most goals
Advertisement 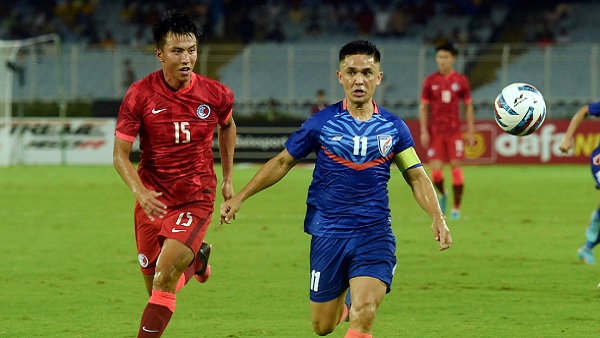 Chhetri achieved the feat during the AFC Asian Cup Qualifier match against Hong Kong on Tuesday, where he scored his 84th goal. He has now equaled the goals of Real Madrid legend and Hungarian player Ferenc Puskas at the international level.

Earlier in October 2021, Chhetri had surpassed the record of 77 goals by legendary football player Pele. He is now third in the list of active international goalscorers behind Portugal’s Cristiano Ronaldo and Argentina’s Lionel Messi.

Currently, Ronaldo is the leading goalscorer in international football with 117 goals, while Messi is fourth with a total of 86 goals.

India wrapped up their AFC Asian Cup Qualifier 2023 campaign against Hong Kong at the VYBK Stadium in Kolkata in style as they registered a massive 4-0 win over Hong Kong in the final game of Group D. Sunil Chhetri, Anwar Ali, Manveer Singh and Ishaan Pandita scored for Blue Tigers.

This was Team India’s third consecutive win in the AFC Asian Cup Qualifiers. Earlier they had defeated Cambodia and Afghanistan.