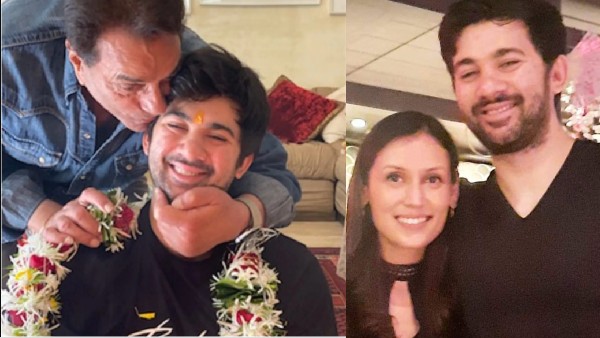 This is how Sunny Deol got married

It is worth noting that Karan Deol’s father Sunny Deol was also married in a similar manner. Sunny Deol got married before the release of her debut film Betaab. However, this marriage was kept a secret till the release of Sunny Deol’s film.

There were rumors that Aditya Chopra wanted to launch Karan Deol but Sunny Deol flatly refused. Because there was a time when Shahrukh Khan was suddenly made a hero in fear and even his scenes were cut without informing Sunny Deol. This cheat of Yash Chopra, Sunny Deol never forgot and after that he never worked with Yash Raj Films. Therefore, when the offer came from Yash Raj Films to launch Sunny Deol’s son Karan Deol, Sunny Deol turned down the offer and decided to launch his own son.

On launching his son, Sunny Deol had to say – I was launched by my father. So I am launching my son. Karan is very serious about his acting career. It was believed that Karan Deol’s film Pal Pal Dil Ke Paas is a remake of Sunny Deol’s superhit film Betaab. Sunny Deol had also approached Sara Ali Khan for this film. But Amrita Singh rejected this offer. Interestingly, Sunny Deol and Amrita Singh were launched desperately by Dharmendra with Vijayata Films.

Second film to be made with Inder Kumar

When Karan Deol was shooting for his debut film, director Inder Kumar saw some footage of Karan’s film and found Karan perfect for his next story. Inder met Karan Deol for the story of this comedy film and Karan liked the story and said yes to the film. But later there was no update on this film. Currently, Inder Kumar is making a film named Thank God with Ajay Devgan and Sidharth Malhotra.

The second film of Karan Deol’s career was Velle which was an official remake of a Telugu film Brochevarevarura. When Ajay Devgan bought the film, he liked it very much and he immediately bought the rights of this film. The film is a funny story of three friends – Rocky, Rambo and Rahul. Abhay Deol was in an important role in the film.

Karan Deol also welcomed his brother and Sunny Deol’s younger son Rajveer Deol into the industry last year. Rajveer is going to break the tradition of Deol family and make his debut with a film by Rajshri Productions. The film will be directed by Sooraj Barjatya’s son Avneesh Barjatya and will also mark Avneesh’s debut with Rajveer.

Fans are eyeing both sons of Sunny Deol – Karan Deol and Rajveer Deol. While Karan Deol has not been able to impress the audience much with his debut film, his brother Rajveer has already started forming fan clubs on social media. Although both Rajveer and Karan are away from the eyes of social media and cameras, for the time being, they are focusing on their work. Now it has to be seen whether anyone confirms the engagement of Karan Deol or else it will remain a rumour.

Pooja Hegde got a gift from Salman Khan on the very first day of shooting of Kabhi Eid Kabhi Diwali, see pic