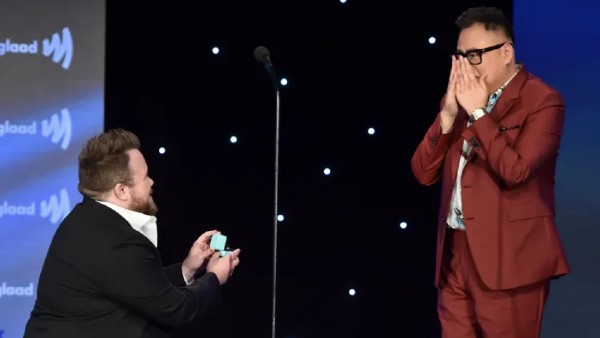 Superstore
star Nico Santos at the 33rd annual GLAAD Media Awards. While speaking on stage, Smith popped the question after he bent his knee and gave a heart-warming speech.

The magical moment of him proposing to Santos in front of the heavily cheering crowd at the Beverly Hilton Hotel was one of the major highlights of the award ceremony. Smith expressed his awe and gratitude for Santos in his speech to the audience and how Santos swept him off his feet. He continued and said, “Nico, your love has taught me how to love. You are my other half, and I want to spend the rest of my life with you,” whilst slowly going down on one knee.

A surprised Santos quickly said yes before he slipped the ring on his finger. Santos was indeed overwhelmed by the gesture as he seemingly teared up after his now-fiancé’s big proposal. The couple received a standing ovation as the crowd cheered for them and their heart-warming union.

For the uninitiated, Nico and Zeke have been together for four years after the first meeting at the 2018 GLAAD Media Awards. Smith had confirmed their relationship later that year. Hence, their engagement was a full circle for the couple as they first met at the award ceremony.

After yesterday night’s function, both of them took to their respective Instagram handles to celebrate their engagement. In his post, Zeke wrote, “He said yes. I’m the luckiest guy in the world,” while Santos simply confessed, “I said yes. You have my heart forever.”