'Take off the spectacles of religion and see that the whole of India is in danger', Abhishek Banerjee targets BJP in Assam
Advertisement 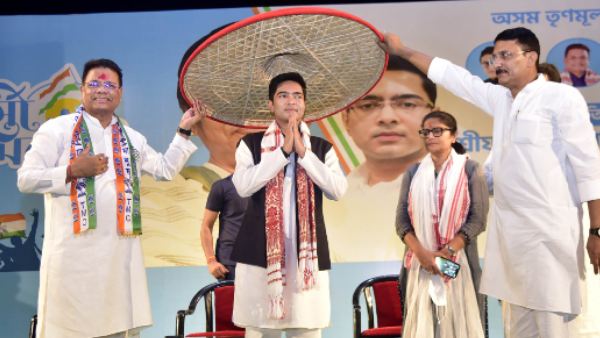 Kolkata, May 11: After winning Bengal, the Trinamool Congress (TMC) is now eyeing the entire Northeast, where the party is expanding rapidly. Meanwhile, on Wednesday, TMC MP and Mamata Banerjee’s nephew Abhishek Banerjee visited Assam and targeted the BJP fiercely. He claimed that his party would win 10 out of 14 parliamentary seats in the 2024 Lok Sabha elections. Apart from this, TMC will do everything possible to oust BJP from power. Although TMC had fielded its candidates in Goa elections recently, but the party’s account did not open there.

Abhishek Banerjee visited Assam to open the party office in Guwahati and meet state unit leaders. Also visited Maa Kamakhya Temple in Guwahati. During this, while addressing the workers, Banerjee said that we will fight with the people, whether they are Hindus, Muslims or Sikhs. Some say that Hindus are in danger, some say that Muslims are in danger, I say take off the glasses of religion and see that the whole of India is in danger.

Recently, TMC appointed Ripun Bora as its new Assam unit president. Bora was earlier in the Congress, but in April 2022 he joined Mamata Banerjee’s party. During Banerjee’s visit on Wednesday, many big leaders and workers joined the TMC. Addressing him, Abhishek Banerjee said that we will fight till the last drop of our blood and end the oppressive BJP rule in Assam. From law and order to safety of women, double engine government is indeed a disaster. In such a situation, we should show the way out to the corrupt and two-faced government.

Maharashtra Congress targeted NCP, Nana Patole said – sat next to him and stabbed him in the back