Tej Pratap told Sonu of Bihar, working under us as an IAS, stopped speaking after listening to the child's answer, had to cut the phone
Advertisement 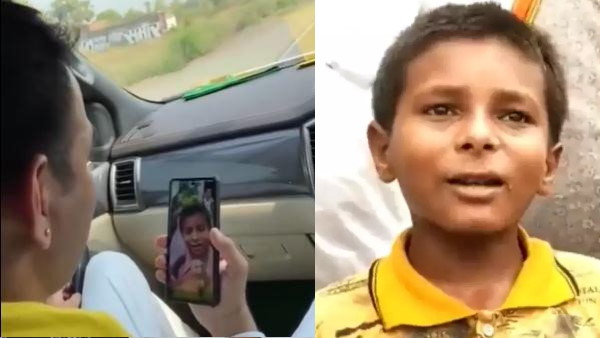 Tej Pratap Yadav made a VIDEO call to Sonu

In the video, Tej Pratap Yadav is sitting on the front seat of the car and talking to Sonu on a video call. In a conversation of about one and a half minutes, Tej Pratap praised Sonu a lot. Meanwhile Sonu asks, ‘Sir when will you come to our village?’ On this Tej Pratap says, ‘I will come when you call, you are a bold boy. We have become your fans. You are the star of my Bihar.

Sonu told Tej Pratap – I will not work under anyone

Tej Pratap asks, will you become a doctor or an engineer? Sonu gives a direct answer and says, ‘Sir IAS has to be made.’ To this, Tej Pratap says, ‘Becoming an IAS and working under me, when we come to the Bihar government, is fine.’ Sonu replies, ‘Sir, we will not work under anyone’. After listening to Sonu, Tej Pratap starts looking towards the driver, then he has to disconnect the phone.

The video of this conversation between Tej Pratap Yadav and Sonu has gone viral on social media. By sharing this video, people are praising Sonu’s confidence and impetuosity.

Who is Sonu Kumar, how did he become famous?

Sonu is a resident of Nima Kol in Nalanda district of Bihar. Sonu’s age is 11 years. Father’s name is Ranvijay Yadav. Father runs a yogurt shop. Mata Leela Devi is illiterate. In the past, Chief Minister Nitish Kumar had reached Bigha in a public dialogue program. During this program, Sonu had said his words while joining hands with Nitish Kumar. Sonu had said that the condition of education in government schools is very bad. As soon as this video went viral on social media, Sonu became an internet sensation and became his millions of fans.

Difficult to win from Amethi and Rae Bareli! Can Congress send Priyanka Gandhi to Rajya Sabha?