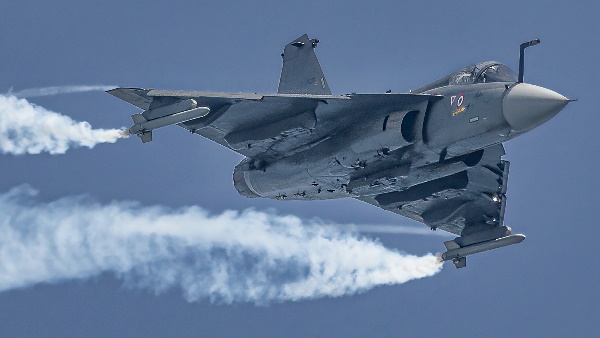 Airstrike capability to be increased manifold

Government sources said that the Indian Air Force had recently signed a contract for the JDAM kit. These techniques help in attacking targets from air to ground at a distance of more than 80 kms. Sources said that the first fleet to be equipped with these JDAMs will be Light Combat Aircraft Tejas which is going to be one of the mainstays of the force in future. With the addition of this technology, the capability of doing air strikes in the aircraft will increase manifold.

Indigenous air-to-air missile has also been installed in it.

He said this capability would give domestic aircraft an edge over adversaries as they would be able to destroy targets from afar without any problem. The Indian Air Force had recently equipped Tejas with French-origin Hammer air-to-ground stand-off missile with indigenous Astra air-to-air missiles. Apart from this, indigenous air-to-air missile has also been installed in it.

Indian Armed Forces are making full use of the delegated financial power given by the government in different phases to enhance the capability of their weapons. So that the enemy can be dealt with under any circumstances. The Indian Air Force is equipping the indigenous LCA aircraft Tejas with maximum strike techniques. The Indian Air Force is further enabling the indigenous LCA Tejas fighter aircraft program by adding more capabilities to the aircraft.

The Air Force has already operationalized its two squadrons with the approval of Initial Operational and Final Operational. While a contract has been signed for 83 Mark1As that will be delivered a few years from now. The Air Force is also eyeing the LCA Mark II and the AMCA being developed by DRDO for the same. The indigenous Tejas aircraft is a single-engine and multi-role ultra-agile supersonic fighter aircraft. It is manufactured by Hindustan Aeronautics Limited.

Tejas can easily hide from enemy

Tejas is effective in combating airspace as well as in high threat situations. It is mainly an aircraft used in aerial warfare. They can lift a load of eight to nine tonnes. Along with this, these light combat aircraft can fly up to 52 thousand feet. Apart from this, they can fly at the speed of sound i.e. from Mach 1.6 to 1.8. Another feature of Tejas is that it is capable of attacking enemy aircraft from a distance. It also has the ability to hide from the enemy.

Today ‘The Kashmir Files’, which spread hatred in the country of ‘Amar Akbar Anthony’, is getting tax free: Tharoor