The hard work of the veteran BJP leader turned water, know who is Amar Paswan who defeated
Advertisement 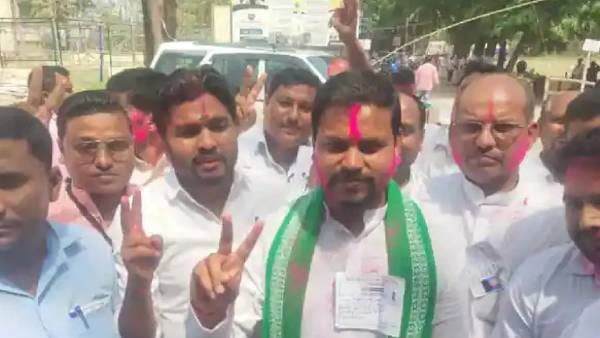 Even veteran leaders of BJP could not get victory

The Bochan assembly by-election had become a battle of the nose for the Bharatiya Janata Party. Union Minister Nityanand Rai, Giriraj Singh Bihar BJP President Dr. Sanjay Jaswal and all BJP veteran leaders left no stone unturned to make Baby Kumari win in Bochahan, but despite this, everyone’s hopes were dashed. BJP had to face defeat in front of RJD’s strategy. Amar Paswan has not suddenly entered politics. He has inherited politics. It is being said that because he is the son of Musafir Paswan, the veteran leader of Muzaffarpur.

Amar Paswal is the youngest among siblings

Amar Paswan has 9 siblings in which he is the youngest. There are seven sisters elder to Amar Paswan and two brothers. Let us tell you that Amar Paswan has done most of his studies outside Bihar. He has done MBA from Bangalore. Along with this, he has also been a player of cricket. At the same time, he is married to a Sikh girl. He stayed with his father (Musafir Paswan) when his health deteriorated. Even after the death of his father, he had given the fire. After the death of his father, Amar Paswan was seen as the political successor of the traveler.

Amar is the owner of property worth crores

A fight was being witnessed among the candidates of three parties for the Bochahan Legislative Assembly by-election. In which Amar Paswan from RJD, Baby Kumari from BJP and Geeta Kumari from VIP were in the fray. Do you know who has the most wealth among these three? Of these three candidates, Amar Paswan has assets worth about Rs 15 crore. At the same time, along with Rs 28 lakh cash, Rs 2.63 crore is deposited in the bank account. All of them have assets above Rs 10 crore. Amar Paswan also used the education given by his father to defeat BJP candidate Baby Kumari with his political bet despite NDA alliance being in power in Bihar. It is worth mentioning that the veteran leaders of BJP had thrown their full strength against him, but despite this he did not panic and succeeded with strength.

Let us tell you that Musafir Paswan had been MLA for two terms from Bochahan assembly. He used to get along well with the high command of all the political parties of Bihar. After the death of Musafir Paswan a few months ago, by-elections were held for Bochan seat and his son Amar Paswan succeeded his father. That is why it is being said that Amar Paswan has inherited politics. He had learned political tricks from his father only. His father was earlier a labor leader of Muzaffarpur. Gradually, while fighting that struggle, he made a different position for himself.

Asansol by-polls: Why this record-breaking victory is special for TMC and Shatrughan Sinha

MNS furious for not removing loudspeakers from mosques in Maharashtra, said this about Sanjay Raut after ultimatum