The heroic great of UP dominated the WWE ring, a foreign wrestler was killed in just 80 seconds
Advertisement 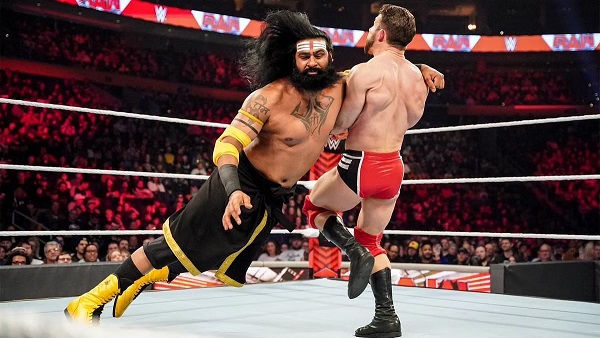 At the very beginning of the match, Veer started pulling his side. He gave back to back slams to Frank. But as soon as Frank hits the elbow to Veer and after saving himself again gives Big Boot to Veer Mahan. What was it then… the heroic great got furious. Frank found it costly to play the bet and Veer gave a Big Side Slam and hit the opposing wrestler again on the corner.

Veer Mahan without delay, splashes Frank and hits the closeline. He then grabbed Frank in his submission move cervical clutch. Frank Lowman could not free himself. In the end, he was left with no option but to tap out. In this way, Veer Mahan won the match in just 80 seconds.

Where is Veer Mahan from?

Although his name is Rinku Singh, but the WWE company has named him Veer Mahan. Veer Mahan hails from Gopiganj in Ravidas Nagar district of Uttar Pradesh. He was born on 8 August 1988 in Gopiganj. Veer Mahan, who is six feet four inches tall and 125 kg, made his WWE ring debut on April 4 this year. He had badly defeated father-son duo Rey Mysterio and Dominic Mysterio as soon as they entered the ring.

India reached the quarter-finals of the Uber Cup 2022, PV Sindhu-Akarshi rocked the US team