'The thing that hurts me is...' Anand Mahindra's pain by sharing a video of a young man cycling leaving his hands
Advertisement 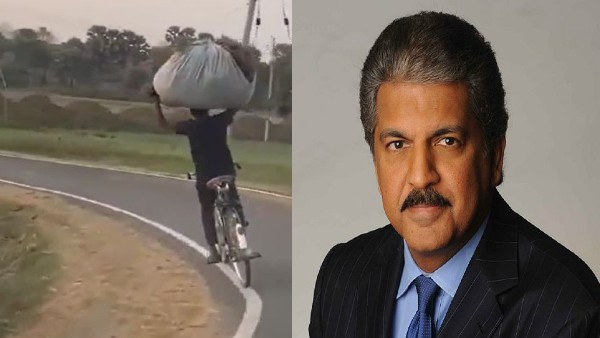 Business tycoon Anand Mahindra is known for his forthrightness. He wears talent in the crowd. Not only this, he has helped many such people who really needed some kind of help. Now on Twitter, he is seen very impressed with a village boy. Sharing the video of the young man, he has praised him fiercely.

In the video posted by Anand Mahindra, it can be clearly seen that a man from the village is riding a bicycle with a bale of straw on his head. Surprisingly, he has grabbed the bundle with both his hands and the cycle is running without holding the handle. In the video, the young man is also turning the bicycle easily without using his hands. All his focus is on catching the bundle on his head.

‘The thing that hurts me is…’

The video is shot from inside a vehicle, which is chasing the youth. The video ends abruptly when the man on the bicycle exits the road and turns towards the village. Praising the young man, Anand Mahindra wrote, “This man is a human Segway with a gyroscope in his body! The young man’s balance is superb. However, what hurts me is that in our country like him.” There are many people who may be talented gymnasts/players, but they are not easy to identify and train.”

One user told him that for this we can make some platform like Village Got Talent, while another wrote that create a platform where videos of such people can be uploaded. On which Anand Mahindra also agreed. You also see this video of village boy cycling (at the end of the news)

External Affairs Minister S Jaishankar saddened by the condition of a hospital in Sri Lanka, instructed for immediate help