'There have been four, now I can't even think of the next child at the age of 60...', Kareena warns Saif
Advertisement 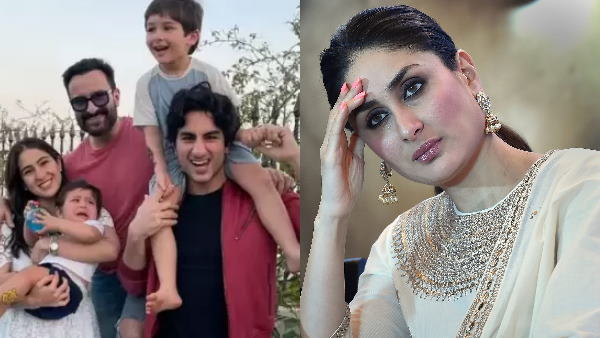 ‘Saif has become the father of a child in every decade’

In an interview to the fashion magazine ‘Vogue’, Kareena Kapoor said, ‘Saif has become the father of a child in every decade… in his twenty, thirty, forty … and now even in his 50th year of age. . But now I have clearly warned them that this is not going to happen in the 60s. I believe that only an open minded person like Saif Ali Khan can be the father of four children at different times of his age.

Kareena Kapoor further said, ‘Saif gives full time to all his children. And, now we are trying to balance time with Jeh too. There is an agreement between both of us that when Saif is shooting for a film, I will try not to be on the shoot in that time schedule. It is worth noting that Kareena gave birth to her second son Jahangir last year, while Taimur was born in the year 2016.

‘Taimur is kind of a mini Saif’

At the same time, while talking about the bonding between Saif Ali Khan and Taimur, Kareena said, ‘Taimur also likes to meet people like Saif. If some people have come to meet us at our house, then he wants to be a part of that atmosphere. In a way, he is Mini Saif, who aspires to be a rockstar. Taimur listens to the songs of Steely Dan with his father. There is such a bond between them, which is difficult to even guess. Taimur says Abba is my best friend.

25 years difference in age between Sara and Taimur

Let us tell you that there is a difference of 25 years between Saif Ali Khan’s daughter Sara Ali Khan and Taimur. Often Saif and Kareena also share pictures with their four children on social media. If we talk about the work front, then very soon Kareena Kapoor will be seen in the film Lal Singh Chaddha opposite Aamir Khan. At the same time, Saif Ali Khan has films like Adipurush and Vikram Vedha in the lineup.

‘We worked hard to make the relationship strong’

Earlier, in her recently written book about pregnancy, Kareena Kapoor told how Saif Ali Khan had encouraged her. Kareena said, ‘Saif used to tell me that I can do all this. We both put in a lot of hard work to make our relationship stronger and I am sure the effect will be reflected in our children as well. Just as Taimur has confidence, I hope Jeh has the same confidence.

Sure thing! Alia Bhatt and Ranbir Kapoor will get engaged! Special plan made for this month

These pundits reach home everyday to worship Anupam Kher, the actor dedicates himself to his father The Kashmir Files