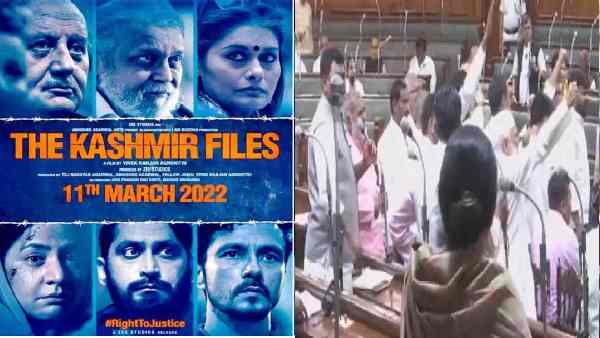 Ruckus in Bihar Assembly over ‘The Kashmir Files’ movie

On Monday, opposition MLAs created a big scene in the Bihar Legislative Assembly against Vivek Agnihotri’s film ‘The Kashmir Files’. Tickets for ‘The Kashmir Files’ were distributed free of cost by the state government, but the opposition MLAs created a huge ruckus in the House and started tearing and tossing its tickets by entering the Well. The Bihar government had already made the film on the brutality of Kashmiri Pandits in Kashmir in 1990 tax free. After that senior BJP leader and Deputy Chief Minister Tarkishore Prasad had also invited all the MLAs to watch this film on March 17. Significantly, this film made on the excesses of Kashmiri Pandits was a blast at the box office.

‘It’s the ticket to hate’

In fact, on Monday, legislators of the opposition Rashtriya Janata Dal and CPI-ML had come to the House preparing to oppose the film ‘The Kashmir Files‘. They entered the Well of the House and started tearing up the tickets. During this, Assembly Speaker Vijay Kumar Sinha kept asking him to go to his seat and comment on it only after watching this film. But, CPI-ML MLA Mehboob Alam said that ‘this is a ticket to hate’. Muslims have been targeted in the film. RJD MLAs Rakesh Roshan and Rampreet Sada said, ‘What message does the government want to give to the society through such films?’ (from photo-video of the ruckus)

Watch the film first, then criticize it – Deputy Chief Minister

Amidst the uproar, the Speaker also adjourned the House for half an hour, but the opposition MLAs continued their protest outside the House as well. CPI-ML MLA Ajit Kushwaha said that this is a ploy on the part of BJP to further its communal agenda. Never before has the government seen such an attempt to promote the film. But, the deputy chief minister urged the protesting legislators not to ‘make any preconceived notions about a well thought-out film.’ He said, he said that the film has been cleared by the censor board and is running in theaters for many days. ‘If you feel even after watching the film, then you are free to criticize it.’

Opposition is happening under the agenda – ruling party

However, rest of the ruling party ministers and BJP MLAs Jibesh Kumar and Pramod Kumar said that the film “shows the bitter truth and opposition members are opposing it as an agenda”. Pramod Kumar said, ‘The reaction of ordinary patriotic citizens can also be seen for their protest against the film.’ Before this, many BJP leaders and workers have gone to the cinema houses to watch this film.

Barring a certain section in the country, this film is fully meeting the test of success. Despite being a low budget film, this film is fast moving towards touching the earning of 250 crores. Movie critic and trade analyst Taran Adarsh ​​tweeted on Monday morning and said that it has so far earned Rs 228.18 crore.

Haryana: Khattar government is preparing for elections on the lines of AAP, this strategy is being prepared