These pundits reach home everyday to worship Anupam Kher, the actor dedicates himself to his father The Kashmir Files
Advertisement 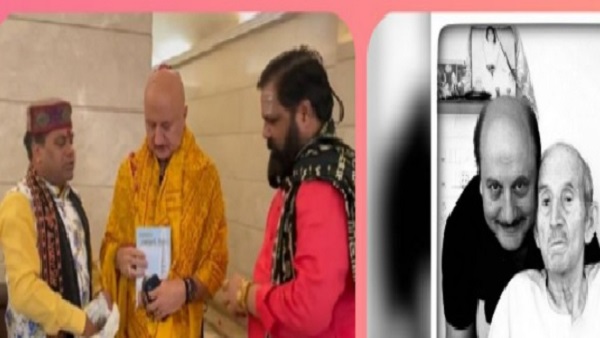 tried to bring the truth to the people

So while away from all these things, Anupam Kher has given a strong answer to everyone saying that he has been talking about the pain of Kashmiri Pandits for a long time, not from today. I am thankful Vivek Agnihotri talked about this after years and tried to bring the truth to the people.

Anupam Kher has shared a video clip on Twitter, in which some pundits are worshiping him. Posting his video, Anupam Kher wrote the caption that ‘For the last few days or rather, a few days after the release of #TheKashmirFiles, every third and fourth day a pandit or a priest comes under my house and does puja and leaves without asking for anything. I am grateful and ungrateful after getting their blessings! Everywhere Shiva!’ 🙏😍🙏 #KuchBhiHoSaktaHai #Blessed

Know what is the story of exodus of Kashmiri Pandits

In the video shared by Anupam Kher, two pundits are seen reciting shlokas and showering rose petals on Anupam’s head. The actor is donning a yellow dupatta shawl around his shoulders. He also has a book in his hand.

The actor dedicates The Kashmir Files to his father

Not only this, Anupam Kher shared his father Pushkarnath ji on social media today. Film The Kashmir Files has been dedicated to. Posting his father’s photo, he wrote that ‘My last picture with my father Pushkarnath ji. Simplest soul on earth. Touched everyone’s life with his kindness. a simple man. But an extraordinary father. He wanted to go to Kashmir, but could not. My performance in #TheKashmirFiles is dedicated to him. #kashmirihind

This video and post of Anupam Kher is becoming increasingly viral at this time and people are commenting fiercely on it. Anupam Kher, Mithun Chakraborty, Darshan Kumar and Puneet Issar have played important roles in the film.

‘There have been four, now I can’t even think of the next child at the age of 60…’, Kareena warns Saif

The film ‘RRR’, which is earning the flag of earning, has now made another record, in this case ‘The Batman’ also beat