These superstars including Salman Khan and Chiranjeevi will launch the teaser of Kicha Sudeep's Vikrant Rona!
Advertisement 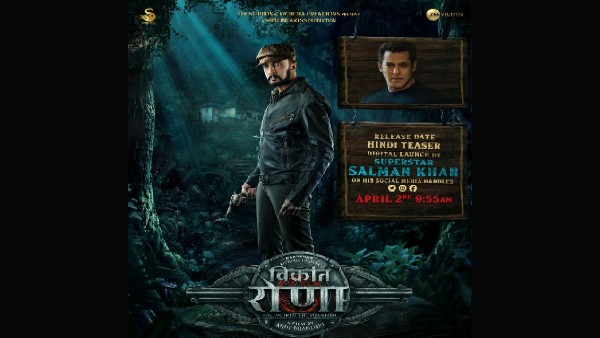 Kichcha Sudeep’s fantasy action 3D adventure ‘Vikrant Rona’ is all set for a massive theatrical release. In such a situation, the makers have decided to leave no stone unturned in the promotion of Big Ticket release. Adding to the anticipation amongst the audience and the fans of Kichcha Sudeep, it is learned that the four biggest superstars of the industry from different languages ​​will be launching the grand teaser of ‘Vikrant Rona’ later this week.

Along with this, Salman Khan, Chiranjeevi, Mohanlal and Simbu will be seen launching the teaser of the film in Hindi, Telugu, Malayalam and Tamil. Badshah Kicha Sudeepa’s 3D fantasy action adventure ‘Vikrant Rona’ is undoubtedly one of the most awaited films releasing this year.

So, ever since the makers launched a glimpse of the film last year, the film has created immense excitement and curiosity among the audience, especially the fans of Kichcha, who are eagerly waiting to see the teaser and trailer. are doing

Vikrant Rona which is a pan world 3D film has been one of the most awaited movies of the country. From its title launch on The Burj Khalifa to bringing Jacqueline Fernandez on board and even announcing a release in over 50 countries, ‘Vikrant Rona’ has been in the news for every reason. After his successful innings with the action drama ‘Phelwan’, Zee Studios announced its next mega venture with Kichha Creations, the pan India film ‘Vikrant Rona’.

Let us tell you, ‘Vikrant Rona’ which will see Kicha Sudeepa, Jacqueline Fernandez, Nirup Bhandari and Neeta Ashok, is presented by Zee Studios. It is produced by Jack Manjunath under his own production Shalini Arts and co-produced by Alankar Pandian of Invenio Origins. Anoop Bhandari has directed this film.