'Thomas Cup victory is bigger than 1983 World Cup', Gopichand made a big statement on the historic title
Advertisement 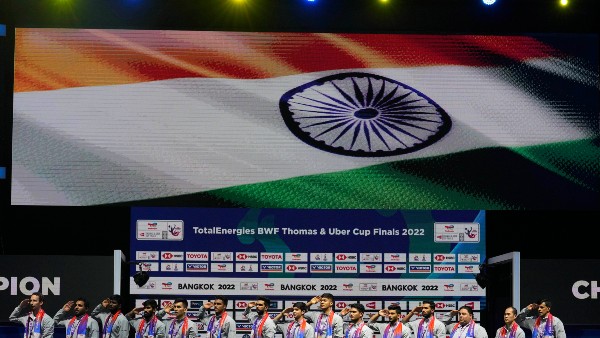 New Delhi. In the final match of the Thomas Cup 2022 played in Thailand, the Indian badminton team ended a 73-year drought and won their maiden title of the tournament by winning 3-0. India has become the sixth team to win the Thomas Cup, also known as the World Cup of Badminton, in the men’s section. Earlier this feat was achieved only by the team of Indonesia (14 times), China (10 times), Malaysia (5 times), Denmark (1 time) and Japan (1 time).

After this victory, there is an atmosphere of celebration in India, PM Modi, Union Sports Minister Anurag Thakur and many sports luminaries have congratulated the Indian badminton team expressing happiness on this achievement. The name of India’s chief badminton coach and former All England champion Pullela Gopichand is also included in this list, who has described this victory as a new chapter in history.

Read more: India created history in Thomas Cup, then Sports Minister Anurag Thakur was convinced, told how much will be rewarded

P Gopichand believes that in terms of badminton, this win is bigger than the victory in 1983 Cricket World Cup as it took India 73 years to achieve it. India’s youth badminton team defeated 14-time champion Indonesia 3-0 in a one-sided fashion in this final match played in Bangkok. India had earlier made their name among the most successful teams of this tournament by defeating one-time champion Denmark in the semi-final match and five-time champion Malaysia in the quarterfinal match.

Speaking to India Today, Pullela Gopichand said, “I would say from the perspective of the game of badminton that this win for India is bigger than the victory in the 1983 Cricket World Cup. I don’t think anyone thought that we would achieve such a big feat in badminton and win the Thomas Cup, which is considered to be the World Cup of badminton.

1983 World Cup increased the craze of cricket in India

Significantly, in the 1983 Cricket World Cup, the Indian team won its first title by making a big upset under the captaincy of Kapil Dev. Kapil Dev’s team defeated the then dominant West Indies team in the cricket world and inspired many generations to come to adopt the game of cricket. Sachin Tendulkar, who is called the God of Cricket, has said many times in his statement that he started batting and focused all his attention only after the victory of the Indian team over West Indies in that historic final played at Lord’s ground.

This victory will encourage many generations

Pullela Gopichand believes that India’s win in the Thomas Cup after 73 years will make a similar impact for badminton. After the Olympic victories of Saina Nehwal and PV Sindhu in India, this game has already made its place among the people but this victory in Thomas Cup will add to its popularity and many generations to come. Will be seen achieving a new record.

CSK gave a target of 134 to GT, broke the record of most sixes in a season of IPL