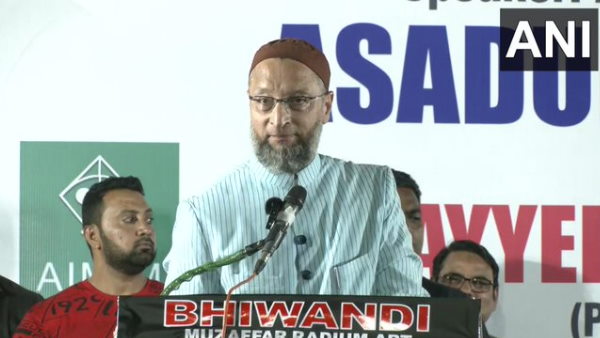 New Delhi, May 29: AIMIM chief Asaduddin Owaisi lashed out at NCP, Shiv Sena and BJP during a rally in Maharashtra’s Bhiwandi on Saturday. Owaisi said in the rally that in the assembly elections, the people of Nationalist Congress were saying that vote for Owaisi because BJP has to stop Shiv Sena but later changed its stand by forming an alliance with Shiv Sena.

In a public meeting in Bhiwandi, Asaduddin Owaisi said that in the assembly elections, the people of the Nationalist Congress were saying that do not vote for Owaisi because BJP, Shiv Sena have to be stopped. After the elections, the NCP has tied the knot with Shiv Sena. Now I don’t know who is the bride among them? Asaduddin Owaisi did not stop only, he has also targeted the ongoing temple-mosque dispute in the country.

Owaisi said, ‘This India is neither mine, nor Uddhav Thackeray’s, nor Modi’s, nor Shah’s. If India belongs to anyone, it belongs to Dravidians and Adivasis. People had come from four places but BJP is only after Mughals. Owaisi said that our father is Baba Adam. Mughal is not our father. First of all tell this, who did injustice to the Buddhist people in the country.. Who killed the grandson of Emperor Ashoka?

He said that Swami Vivekananda himself has written in his book that Jagannath temple has been built on Buddhist monastery, if it is a lie then act on us. If you talk about a few years old, then we will also ask what happened thousands of years ago? Who was persecuted? Will keep this in front of everyone with impunity. Owaisi can take a jibe at the Prime Minister and said that the digging being done in the name of temple-mosque in the country, they are actually looking for Modi’s degree.