Umran Malik bowled the second fastest ball in IPL history, know whose name is on the first position
Advertisement 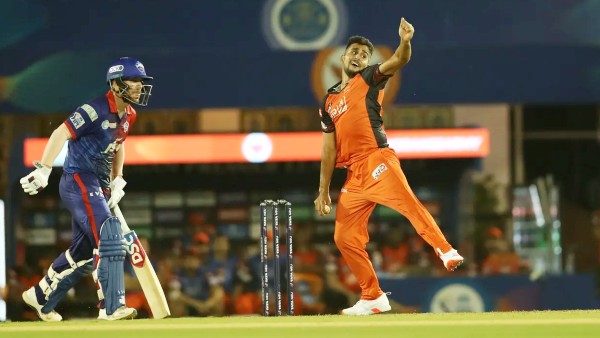 New Delhi. The 50th match of the 15th season of the Indian Premier League is being played between the Delhi Capitals and Sunrisers Hyderabad team, where the Delhi Capitals team scored an unbeaten half-century by openers David Warner (92) and Rovman Powell (67). They have scored 207 runs in the allotted 20 overs for the loss of 3 wickets. No bowler could prove economical for Sunrisers Hyderabad in this match except Bhuvneshwar Kumar (4 overs 25 runs), who also bowled an over maiden.

On the other hand, the team’s rising fast bowler Umran Malik proved to be the most expensive in this match and conceded 52 runs in 4 overs at an economy of 13. During this he could not get a single wicket. Umran Malik came to bowl the last over of Sunrisers Hyderabad’s innings in which Powell scored 19 runs with the help of a six and 3 fours and added 70 runs in the last 5 overs to take the score to 207.

Read more: ‘Now every bowler is licking the dust’ for Kohli, the Caribbean legend expressed concern about the form

The name of this bowler is the record of throwing the fastest ball.

It is noteworthy that the record of bowling the fastest ball in IPL history is in the name of Shaun Tait, who appeared in 21 matches in 4 seasons from 2010 to 2013 for Rajasthan Royals. In the year 2011, Shaun Tait bowled the ball at a speed of 157.71 against the Delhi team, which was faced by Aaron Finch. Even after a decade, this record is in the name of this legendary Australian bowler. On the other hand, Umran Malik has grabbed the second position against Delhi by throwing the ball at a speed of 157 km.

The names of these bowlers are also included in the list.

On the other hand, if we look at the list of fastest bowlers, the name of Anrich Norkhia is also included in this, who has bowled consistently for the last two seasons for Delhi Capitals. Norkhia has consistently bowled at a speed above 150 since IPL 2020. In IPL 2020, against Rajasthan Royals, Norkhia bowled the third fastest delivery in IPL history in the fifth ball of his first over and achieved a speed of 156.2 km, on which Butler hit it for a four. At the same time, Norkhia bowled the next ball at a speed of 155.21 and by hitting Butler, he also took the record of the fourth fastest ball. At the same time, Umran also took the record of the fifth fastest by throwing the ball at the speed of 155. The name of Dale Steyn (154.4), Kagiso Rabada (154.23, 153.91) is also included in this list, while Umran Malik continues to maintain his name in this list.

Warner himself did not score a century, won everyone’s heart by saying this to Rovman Powell