Urfi Javed was clicking a photo wearing a hot dress, the guard put her in color, Video Viral
Advertisement 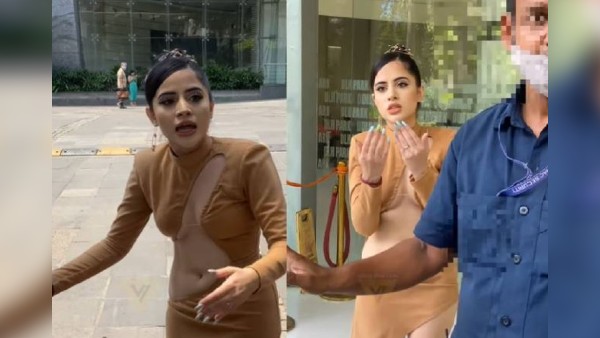 Urfi’s days are not going well!

Urfi Javed has become an internet sensation for her different dressing sense. As soon as she posts her photo on social media, it becomes viral. At the same time, the paparazzi’s cameras are also in search of Urfi all the time. In such a situation, if Urfi Javed goes out to roam anywhere in Mumbai, the paparazzi’s cameras find him. But recently something happened with Urfi, after which it can be guessed that his days are not going well.

Urfi got down from the cab wearing a hot dress

We are saying this because when I saw him in Mumbai a day ago, it felt like this. Because before entering a building, the security guard stopped her, after which the actress got into an argument with the guard. Actually, Urfi Javed was seen getting down from a cab and going towards the building. During this, the actress was wearing a tight fitted front open short dress of brown color. She styled her look with high golden peep-toe heels and a high bun with safety pins.

Guard stopped from getting the photo clicked

On the other hand, as soon as she gets down from the car and starts going towards the building, the paparazzi asks her to click the photo, to which Urfi says that when she has called you, she cannot stop you. Saying this, the actress goes ahead and starts posing in front of the building to get the photos clicked when the guard comes there and stops the paparazzi from clicking the photo.

Urfi got angry with the guard’s action

After coming there from the paparazzi who was taking the photo, the guard asked if he had got permission to take the photo here. Seeing this kind of behavior of the guard, Urfi gets angry and argues with the guard and says, ‘You know what, I am going back.’ After this an angry Urfi can be heard saying why am I here. Am? Saying this, Urfi leaves from there. (video at the end of the story)

Poor, uncle, dumb… these words were seen making fun of the journalists, John said- ‘You have left your mind…’

How Bharti Singh is working even in 8th month of pregnancy, Nikki Tamboli told the truth