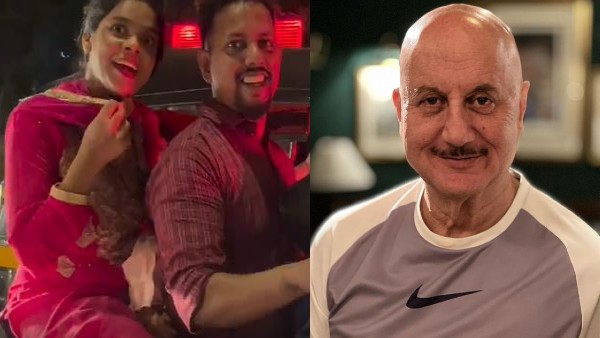 Meeting with Muslim family on the occasion of Eid

On the occasion of Eid, actor Anupam Kher has shared a video of a Muslim family riding a scooter on his social media account, in which he is heard talking about that family. As it is known from the video, the Muslim family went out for a walk in the city on the evening of Eid. When Anupam Kher’s car stopped for a while at the red light on the way, he talked about that family. This video is being liked a lot.

In the video, you can see that the actor was in his car while four members of a family were on a scooter next to him. When the car stopped, the man started showing his wife towards Anupam Kher, after which Anupam Kher lowered the glass of his car and started talking to him. First of all, as soon as the couple saw Anupam Kher sitting in the car while walking on the scooter, he shook his hand towards him. Anupam stopped the car and inquired about his well being.

Family looted the heart of the actor

However, before sharing this video, he had taken permission from that family to upload it on social media. In this video shared on Instagram account, Anupam Kher is asking many questions to the Muslim family .. like where are you going, what are the names of the children, where do you work. Anupam Kher told him that he is looking very good. Everyone’s smile is so cute. After this the family also congratulated him on Eid.

In the caption of the video, the actor wrote- ‘I collided with a lovely family on the road of Mumbai. It was great to have a conversation with this lovely family. I really enjoyed meeting them. Maybe they liked it too. May God keep them happy always’. This video has been viewed more than 4 lakh 61 thousand times. People are not getting tired of praising the actor. You also see this video of the actor (at the end of the news)