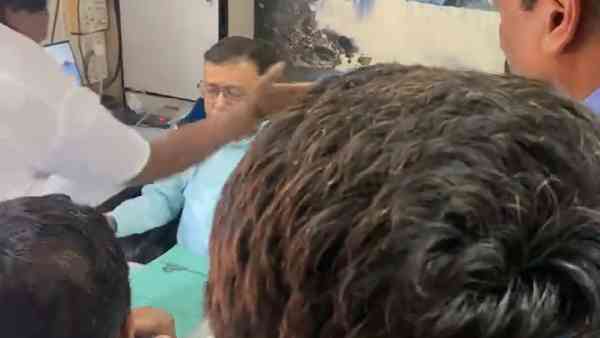 Pune, May 15: BJP spokesperson Vinayak Ambekar has been slapped by some people by barging into his office for posting alleged remarks against NCP chief Sharad Pawar. Pawar’s party NCP workers are accused of attacking the BJP leader and the incident has been caught on camera, after which a political uproar has started on it. In this matter, from the leader of Maharashtra BJP to the Union Minister, the ruling parties of Maharashtra have opened a front. NCP people were enraged by Ambekar for writing remarks against Pawar and he is being accused of attacking him in this way. Maharashtra BJP president Chandrakant Patil has demanded immediate action against the attackers. At the same time, Union Minister Smriti Irani has also questioned such incidents that happened in two days, retweeting the tweet of a Marathi newspaper, alleging that it is suppressing the freedom of expression.

Smriti Irani targeted Maharashtra government
A video has been posted on the Twitter handle of Marathi daily Lokmat on 14th, in which the video of the attack on the BJP leader from Maharashtra has been shared. In which the talk of beating BJP’s Vinayak Ambekar on NCP workers for posting on Pawar in Marathi has been written. Retweeting this, Union Minister for Women and Child Welfare Smriti Irani has written, ‘The alleged champions of free speech beat up an elderly citizen and arrest a woman for speaking her mind. They ruthlessly trample on freedom of expression and their comrades allow this action to take place with a pre-determined silence. ,

BJP demands immediate action against NCP workers
On the other hand, Maharashtra Pradesh BJP President Chandrakant Patil has also shared this video and what is written in the caption in Marathi is roughly meaning that ‘Maharashtra Pradesh Bharatiya Janata Party spokesperson Vinayak Ambekar was attacked by NCP goons. And on behalf of BJP, I strongly condemn this attack. Immediate action should be taken against these goons of NCP.

‘Slick me, broke my glasses’
On the other hand, Ambekar has lodged a complaint with the Pune Police against around 20 NCP workers for thrashing them by barging into his office. He alleges that NCP MP Girish Bapat asked him to apologize for his social media posts. According to news agency PTI, he said, ‘Today I got a call from someone that he wants some tax advice. This man came into my office with 20 people and slapped me. I broke my glasses. I have lodged a complaint with the police and want to register a case.

Earlier, NCP workers had lodged a police complaint against Ambekar, alleging that he had written objectionable posts about Pawar. Earlier, Thane Police had also arrested a Marathi actress Ketki Chitale for her alleged objectionable post against the NCP president.

The so called champions of free speech beat an elderly citizen, arrest a woman for speaking her mind. They crush freedom of expression with impunity and their accomplished accomplices meet their action with pre-approved silence.

Election action started in Gujarat, Congress, AAP or AIMIM, who is giving more tension to BJP?