Video: Fan entered in the middle of the Eliminator match, Virat Kohli's reaction on the police as he did it went viral
Advertisement 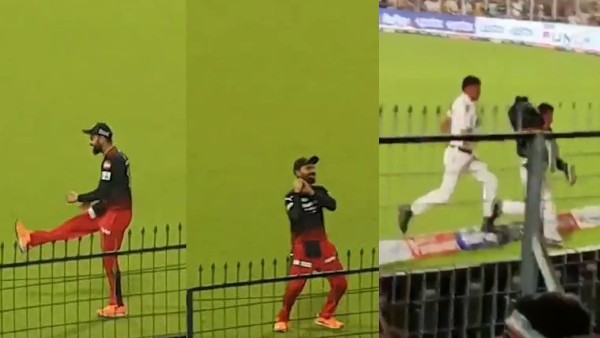 Virat Kohli was surprised to see the reaction of the police

While in the 19th over, the match turned towards victory for RCB, there was also something to be seen during this over, seeing that Virat Kohli could not stop his inner child. The video of this incident is becoming increasingly viral on social media. In fact, in the 19th over of the match, the fan who came to enjoy the Eliminator at Eden Gardens entered the ground and started running towards Virat Kohli. However, the security personnel present there interfered in the middle and prevented the fan from reaching Kohli and took him out of the field. During this, the police personnel grabbed the fan and lifted it directly on his shoulder and took him out of the field.

In this video going viral on social media, the incident between the fan and the policemen can be seen. However, the thing that caught the attention of the people the most was the reaction of Virat Kohli who was currently fielding standing on the boundary. Virat Kohli was surprised to see the reaction of the police personnel and he mimicked the steps taken by the policemen in his own style. Fans are liking this funny style of Virat Kohli on social media. During this, Kohli is seen laughing with his feet on the ground.

Rahul’s wicket fell on the very next ball

It is worth noting that only after this fan’s interference, Josh Hazlewood first took the wicket of KL Rahul, while on the very next ball he took the wicket of Krunal Pandya. Josh Hazlewood gave only 5 runs in this over and took 2 wickets, due to which Lucknow needed 24 runs to win in the last over and they could only score 9 runs. Now RCB team will play against Rajasthan Royals in Qualifier 2 at Narendra Modi Stadium in Ahmedabad where they will be looking to win their maiden title.

‘If I was the coach, I would not have allowed to bat like this’, former veteran lashed out at KL Rahul