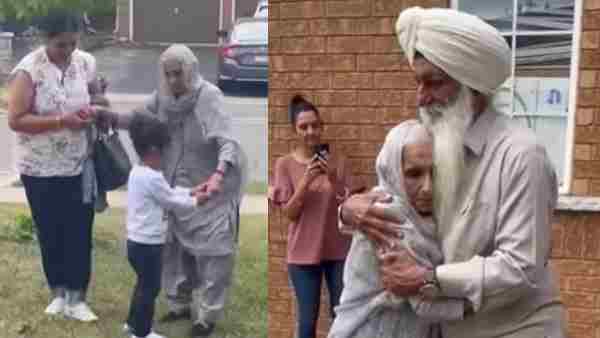 Just before Rakshabandhan, a sister met her younger brother after 20 years. In this video that surfaced on Instagram, it can be seen that when the elder sister meets the younger brother even in the latter part of her life, it is as if the streams of Ganga Jamuna start flowing from her eyes. Seeing the meeting of the brothers and sisters standing around, the relatives themselves started getting emotional. Many people caught the incident on camera.

This priceless moment captured on camera has been shared on Instagram by a page named @Iamjustbesti. It is written in the video caption that grandmother met her younger brother after 20 years. The video is being liked a lot and more than 14000 people have liked it. People are also commenting fiercely on this video that surfaced three days before Raksha Bandhan of August 12.

Many of the people who liked this video of brother-sister reunion wrote in the comment, this is a moment that can be saved for the whole life. With the hashtag #Family is everything, a user named Raman wrote that there are some moments that can be enjoyed for a lifetime. Another Instagram user wrote on the meeting that took place after 20 years of siblings, “Heartbroken to see this loving moment. In some cultures such phenomena are no longer seen. An Instagram user named Sonia Gill wrote that the blessings of elders should remain on all of us.

had to stay away for a long time

Another Instagram user wrote that seeing the affection and love of siblings, it felt as if tears would flow by breaking the dam of their eyes. Instagram user Gurpreet Singh Dhaliwal named Gopi 1991 (@gopi1991) said that the woman in the video is his grandmother. He told that the grandmother has met her younger brother after 20 years. Gurpreet thanked all the users who shared this priceless moment on the internet.

It can be seen in the video that when the brother hugs, the aanchal / pallu moves from the sister’s head. The brother again puts the chunni on the sister’s head. Referring to this, some Instagram user wrote that every frame of the video is very exciting and emotional. A user named Darshan Lal also mentioned about keeping a sardine on his sister’s head and said, seeing how both siblings are expressing love and affection towards each other even after meeting after so many years. A sense of respect arises.