VIDEO: Jos Buttler's bat did not play in the final, threw the helmet in anger
Advertisement 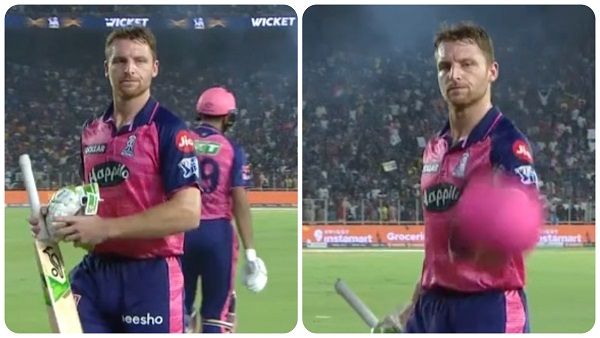 New Delhi. In the Indian Premier League (IPL) 2022, Jos Buttler also scored runs, hit sixes, as well as took the team to the final with a flurry of centuries. However, when he needed to do something big in the final match against Gujarat Titans at the Narengr Modi Stadium in Ahmedabad, he was furious. Rajasthan Royals had high hopes from him, but this time Buttler went on after scoring 39 runs in 35 balls.

threw the helmet in anger
Butler needed to stay longer at the crease, as the team had at one point lost 3 wickets at 79 in the 12th over. But on the first ball of the 13th over, Captain Hardik trapped him. Butler got caught behind the wicket, due to which Rajasthan’s hopes got a big blow. When Butler was leaving the field, anger was clearly visible on his face. In anger, he was seen throwing the helmet in the dugout, as well as taking off the gloves and throwing it in the air. After the dismissal of Butler, the Rajasthan team could not recover. The bowlers of Gujarat restricted him for 130 runs for 9 blows.

Also read- IPL 2022: Jos Buttler won the Orange Cap, hit a lot of sixes, but did not break Gayle’s record

Be that as it may, this season Butler’s bat roared a lot. In the Qualifier-2 match, he scored an unbeaten 106 off 60 balls against RCB to take the team to the final. He was the highest run-scorer in this season. He captured the Orange Cap in 17 matches, scoring 863 runs at an average of 57.35. He also scored 4 centuries this season. Apart from this, Butler was the batsman to hit the most sixes in this season. He has hit 45 sixes.

World record made in the final of IPL 2022, about 1.5 lakh spectators reached the Narendra Modi Stadium to watch the match