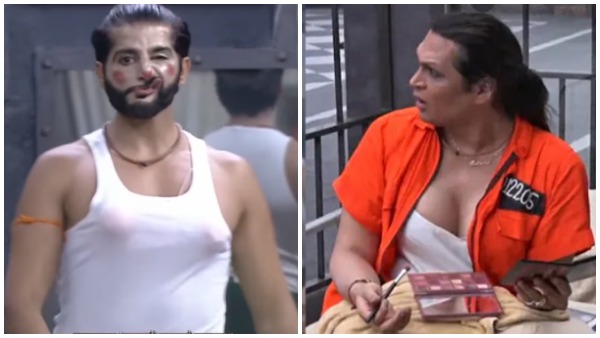 In the video that surfaced on social media, Karanvir Bohra is seen imitating Saisha Shinde through a mime act. During which he is seen making fun of the transgender girl’s breast by filling orange in his vest. Sayesha Shinde got angry with this act of Karanvir.

Saisha, who turned red in anger, said- ‘I can’t speak on my face…’

Sayesha Shinde said angrily, “You guys will not speak anything on my face, only by doing such mime act, you can show it for life. You can only do mime acts.” However, listening to Sayesha, Karan said, don’t take it personally.

‘You are mimicking me by showing me an orange…’

Sayesha Shinde angrily says, “Shut up you guys are mimicking me by showing me oranges. So I will take it personally.” Karanvir Bohra said, “It’s a task you can’t say why would you do it?”

‘I have got breast implant done so what is the problem…?

An annoyed Sayesha then says, “At least I have this to say, so I’ve got a breast implant, so what’s the problem. It all sounds like it’s no fun.” Payal then shouts, “Don’t play the lady card here.”

Sayesha was out of the show after misbehaving with Kangana

Last month, Sayyeshaa was kicked out of the show after Kangana cursed her and Karanvir Bohra for their rude behavior in jail. However, Sayesha loses her cool and says that she will not apologize to Kangana for her behaviour.

Sayesha Shinde said, “If you want me to apologize to you, I can’t because I don’t think I’m wrong. It’s because of the contestants that the host is there.” Kangana then said that there are 50 other people who Want to be a contestant on the show, so you get out of here. “Then you can bring them here,” replied Sayesha.

‘Finally I insulted you Kangana…’

After her elimination, Sayesha Shinde wrote a long note on Instagram, apologizing to Kangana and saying that she wants to return to the show. She wrote on Instagram post, “Finally I have insulted you and for that, I am sorry as I wanted to be a version of you as you said in the very beginning that the winner of the show should be a reflection of you. Mother has always taught me to accept when you are wrong and don’t hesitate to apologise.. it is only by apologizing you learn from your mistakes! I hope you bring me back on the show and I will show you that What am I really capable of?

On hearing Dawood’s name, Mandakini got angry, said- ‘It is not right to scrape the past’