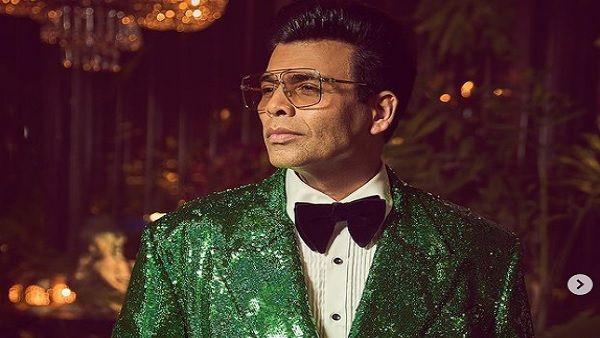 Mumbai, May 28: Karan Johar is not only a great filmmaker but he is also a good producer, actor, anchor and host. He performs all these responsibilities very well together. Recently, Karan Johar celebrated his 50th birthday, whose party photos and videos are becoming very viral on social media. From Shahrukh Khan, Salman Khan, Abhishek-Aishwarya to Karan Johar’s birthday party, many people related to the film industry attended. All the celebs enjoyed a lot in this tremendous party of Karan Johar. Let us tell you that after the birthday party, a video of Karan Johar has surfaced, which is becoming very viral on social media. In this video, Karan Johar is seen screaming while talking on the mobile.

There was talk of going on coffee strike
In the video, Karan Johar while talking to someone on mobile says- Listen very carefully, no one forbids me to come on the show, what do you mean this season can’t happen? After this the person on the mobile says- ‘Sir, all the stars have given a date, but our superstar coffee is on strike. On hearing this, Karan says – what does it mean that coffee is on strike, what does it mean? After listening to Karan, the person present on the mobile further says – After being single for so many years, she could no longer tolerate coffee, after which coffee has gone on strike all over the country. In the video, Karan further angrily says, ‘Anything nonsense, coffee or some unpaid intern who went on strike. It is on strike, it is on strike… Absolutely rubbish. Saying this, Karan Johar cuts the call.

Karan Johar was seen screaming
It is further seen in the video that Karan Johar picks up a coffee mug from the make-up table in his vanity van and sees that there is no coffee in it. Seeing this, Karan Johar’s mercury rises even more and he throws down the coffee mug in anger and shouts loudly. The bodyguard standing outside the vanity van gets alert after hearing Karan Johar’s screaming. Many celebs have also reacted to this video of Karan Johar.

Koffee with Karan may be promoted
Karan wrote in the caption accompanying the video- Life Update: I don’t know how long I will be able to live without my sweet coffee. I still can’t believe it. In the caption, Karan has written #CoffeeIsOnStrike as well as #Bollywood and #Ad. Let us tell you that nothing has been officially revealed about this video yet, but looking at the video, it looks like it could be a promotional video of the new season of Koffee with Karan.

Tamannaah Bhatia’s killer style in pink outfit, you will be surprised to know the price of the dress

The name of Akshay Kumar’s film ‘Prithviraj’ changed, the makers were happy with the new name