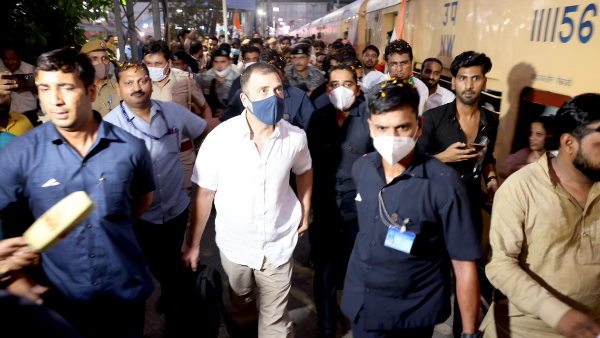 According to media reports, Congress leader Rahul Gandhi left for Udaipur by Chetak Express train from Sarai Rohilla railway station on Thursday evening. Congress CWC leader is also present in the train with him. The Congress said that the main goal of ‘Nav Sankalp Chintan Shivir- 2022’ is to find progressive solutions to the problems of the people. Many Congress workers were present at the railway station along with many old party leaders.

#WATCH , Delhi: Railway porters interact with Congress leader Rahul Gandhi on board a train to Udaipur, Rajasthan. Congress leaders are heading to Udaipur for the party’s Chintan Shivir that begins tomorrow.

While the six groups constituted by the party leadership will present their reports on all the burning issues of the country and discuss them in detail, the future roles of Sonia Gandhi, Rahul Gandhi and Priyanka Gandhi in the Congress leadership will also be decided from this contemplation camp. It is possible that the suggestions for fundamental changes in the structure of the party organization in the camp should also be considered, which were presented by Prashant Kishor in an hour-long marathon meeting with party leaders.

On the other hand, Sonia Gandhi will reach Udaipur on the morning of May 13 by a special plane. The responsibility of preparing the camp has been given to the event company. From the food and drink of the leaders to their stay, this event is being handled by the company itself. The meetings to be held in the camp will be held at Taj Aravali only. Different sessions will run on the same day. At the same time, a big dome is being prepared for a common meeting. It will have a seating capacity of 500 people. Chefs from around 10 states of the country have been called during the camp.

Monsoon 2022: Monsoon is coming from May 15 this year, it will rain here before Kerala